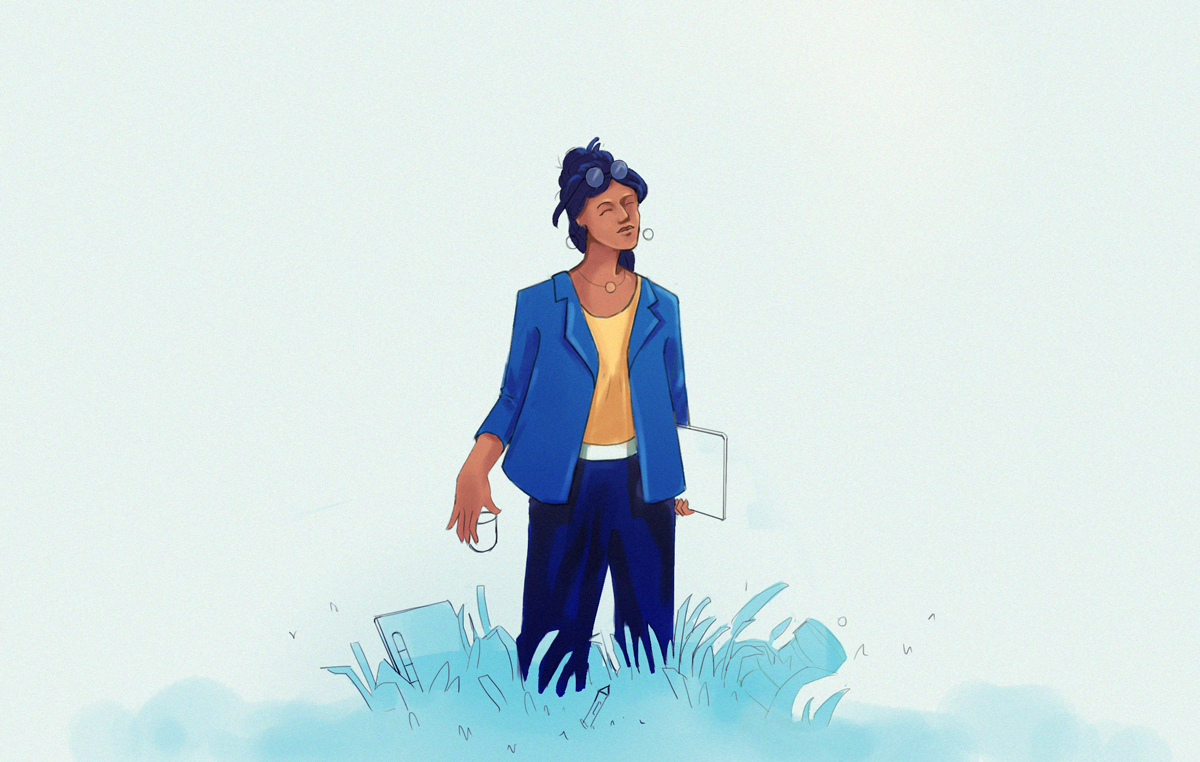 In the book Omoiyari: The Japanese Art of Compassion, Erin Longhurst gives fleeting glimpses of her relationship with her maternal grandfather. She remembers a tree in her ancestral home that was her grandfather’s favorite. Although that tree never bore fruit, her grandfather spent hours taking care of it- watering, pruning, and treating it with utmost care. Erin mentions that this odd habit irritated her at first- why give when you can’t take anything from it. But then, she understands that it was her grandfather’s way of being compassionate to self and to others.

After I read this story, I thought hard about how the tree must have felt? Did not being able to give fruits bore the tree down? Does growth always mean bearing fruits?

Translating it to a designer’s life- is becoming a great designer only about learning new skills and tools? Illustrator, Sketch, Figma, Adobe XD and so on. Where does it stop? When does it stop? Does it guarantee a sweet, ripe fruit? A promotion? An increment?

Don’t get me wrong. I have nothing against learning new tools. I too believe that learning should never stop. But, I am here to tell you that your worth is not measured by the number of tools you master. Instead, it’s measured by how well you understand your domain. For designers, it translates to how well you understand your users, how empathetic you are while solving problems, how curious you are to explore, experiment and learn new things.

So here’s some advice for designers and what they can do to raise their aspirations, rather than drowning in them.

We all have resisted change at some point in our lives. Whether it’s a change in our habits or a change in our skills. Change is hard. And that’s what makes it difficult to adapt. So what can one do to embrace change wholeheartedly?

Accept that you know less or nothing at all. Accept that you are unaware of how to use shiny new softwares. Understand that to do groundbreaking things, you have to start from ground zero. If your intent is clear and you’re aware of your limitations, you’ll be able to pick it up from scratch.

So instead of saying-

‘I’m stupid. I’ll never get around this new tool.”

‘It’s new and I’ve no idea how this works. That’s why it appears to be so difficult. I’m going to keep at it until I learn it.’

Be comfortable with your speed

The world makes you believe that speed is everything. But the truth is that commitment is more important than speed at which you achieve your goals. Just keep your eyes on the finishing line and focus on getting the right knowledge.

Make small but consistent progress. Don’t rush. You’re not in a race. Be kind to yourself. The most useful skills are the ones that you develop after learning, failing and relearning. So put in those extra hours. Don’t be afraid of failing and refining your skills.

‘I am never going to finish it with this snail’s speed.’

‘I need more time to understand and digest this information. I’m going to take it slow.’

Just remember, if you’ve the right motivation and a valid reason to learn the skill, it will be easier to keep going.

Humans are a strange species. We are quick to offer help whenever we see someone struggling. But in asking for help, we hesitate assuming that it might make us look weak or incompetent.

This behavior proves counterproductive while learning. If you’re learning something new and facing some difficulty, it’s better to ask for help rather than struggling to figure it out all by yourself.

‘If I ask for help, my peers will think I am a good-for-nothing.’

‘I am unable to figure it out even after trying multiple times. I should seek help.’

There is a very old proverb that says that the best way to learn something is by teaching it to others. By offering help, we not only learn better but we also begin to admire the little things that you missed earlier.

Remember your first few steps where you struggled a lot? Even if you think you’ve not mastered it all, you’ve sailed through that tough phase where motivations drop. Help others overcome that phase. Now that you have experienced it yourself, help others see the light at the end of the tunnel. Give them hope and a reason to continue.

‘What can I teach others? I myself struggled a lot.’

After everything that you’ve done to learn a new skill, there’s a chance that you’ll fall prey to Imposter Syndrome. You’ll think that you do not deserve that promotion or appreciation for what you’ve done. You’ll feel that somehow your team members have been deceived into thinking that you’re the problem solver. You’ll worry that any day you’ll be exposed and they’ll realize that you’re not as talented as you seem to be.

But here’s the truth- you earned this skill through your hard work. Don’t forget the sleepless nights you spent learning that skill. Acknowledge and embrace your imposter feelings. Write about them– when do they emerge? What triggers them?

So instead of saying-

‘I don’t feel confident enough. I think I’ll take a step back and rethink.’

The advice that I shared above is generic and can be applied to any profession. But the reason why I felt it should be shared with designers is because I feel designers critique their work too much and are scared of receiving feedback on their designs.

This blog is my attempt to help you see beyond what you already know about design. I hope it helps you be more compassionate with yourself and grow holistically as a designer.