A story of true love- my journey at Quovantis

People say that true love is hard to find. And when you find your true love, it changes your life forever. I couldn’t agree more.

What? Don’t roll your eyes yet. It isn’t one of those mushy love stories. My story is different. I fell in love-at-first-sight with Quovantis. And since February is the month of love, I decided to relive my journey, refresh my memories and express my heartfelt thanks to all the people who have helped me on this incredible journey. So here we go!

Flashback to Summer of 2014

I had received a joining offer from another organization but the location was Chennai. Although my family was against moving out of Delhi, I somehow managed to convince them on the condition that I will continue only if they offered me the role of a developer. If not, I agreed that I’ll book the first flight to home. As it turned out, destiny did not want me to stay in Chennai and I came back. 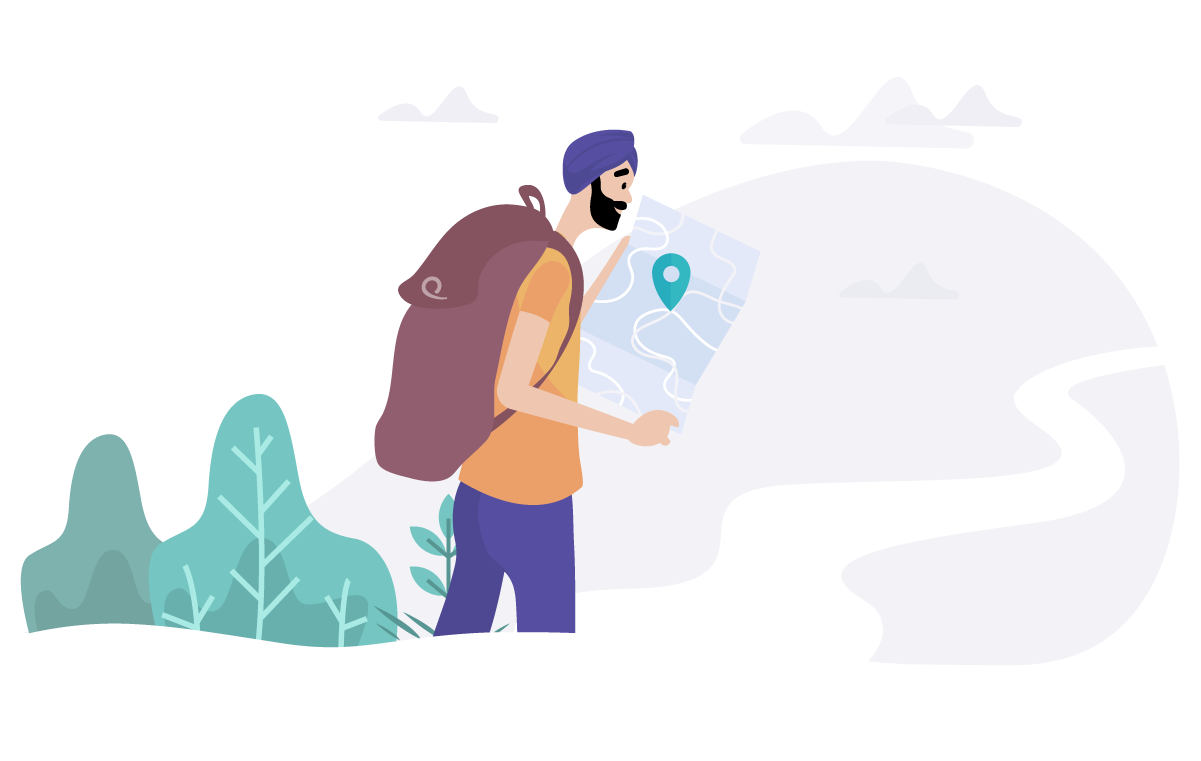 Back home, I was out of college and was desperately looking for jobs, but somehow wasn’t able to find any good role. I had given around 30+ interviews and had almost cracked all of them but still, I didn’t have an offer in hand. Times were tough and I was getting depressed. And then amongst all this chaos, I got an interview invite from Quovantis. Although initially, I was a bit skeptical about the company, primarily because it was located in West Delhi (now we’re in Noida) which isn’t really known for being an IT hub, but I decided to go for it.

I reached the place on time and there was a tsunami of students standing outside the office. It looked as if one whole college was invited for interviews. Even though there were like 100+ people outside the office, I noticed that there wasn’t any chaos around and it was all managed. I got in touch with Sunidhi, who registered me for the screening exam and told me to wait outside.

When my turn came, I really enjoyed the screening round questions. There were like 50 questions that needed to be answered in an hour. Some were really tough ones but somehow I enjoyed them. I was sure I would clear round one and I did. Now it was time for round 2- coding test. I remember I was sitting at Jaypal’s seat and there was a certificate hanging on the desk — “Sprint Champion”. At that moment I wondered if I would ever get something like that for me.

Back to the story; I aced the coding test and then it was time for the interviews. There was some time before round one of the interviews and during which I was asked if I wanted to have something to eat or drink. I was really touched by this because this was the first time that any company was asking me (a fresher!) if I wanted to have some water. Otherwise, at every place where I had gone for interviews, freshers were treated very lowly. This small gesture of Sumit asking me for water had really touched me.

Interview rounds started and they went great. I remember Divya asking me a couple of puzzles. Since I had already worked on them earlier, I told him the answer before he could complete the question. It was fun being interviewed there and I wasn’t really tired although it had been around eight hours since the morning. After the interview rounds, there was the HR round. I had clearly mentioned to Rajat that I’ve had a pretty bad experience with HR till now, mostly because they don’t inform of the final decision. He assured me that he will get back to me and even handed over his card so that I can reach out to him.

But as it turned out, I got the offer letter the next day and was really delighted. I had secured a job at Quovantis, which I wasn’t aware at that time, would change my life for the better.

On the joining day, the time mentioned was 9:30 and I was at the office by 9AM. There weren’t many people apart from Tarun, our CEO, and Sumit, who was busy cleaning. Tarun shook hands with me and told me to wait till Sunidhi or Rajat came to the office. Soon Sunidhi was there and she took me to my allotted seat and started with the joining formalities. This was a seat which used to belong to Sarvesh and here also was a “Sprint Champion” certificate hanging. Constantly looking at that somehow made me wish to have one for myself.

Later in the day, I was introduced to Sudesh and Vivek, who gave an overview of the project that I would be working on and a lesson plan was assigned to me. Sudesh seemed friendly and explained the basics and overall project to me very well. On the other hand, Vivek, my immediate lead, was a little reserved. During lunch, I had a quick chat with Tarun in the office canteen where he pleaded me not to call him “Sir”. He emphasized that he hasn’t been granted knighthood yet and would readily accept the title thereafter. By the way, this joke still persists. This was a little culture shock to me as I had always heard that you refer your seniors as “sir” or “ma’am” but at Quovantis they kept it differently. There was an unusual warmth in the interactions here.

My daily schedule for office would be to reach around 9:30–10AM and then leave around 6 PM. During the day I would try to work on the lesson plan shared to me. But, now that I think of it, I can say I wasn’t really pushing myself hard enough. I kind of skimmed through the plan and announced that I was done with it. Sudesh and Vivek decided to put my learning to test and gave me some project work. This was the first time I was asked to do some real work. The task assigned was simple but I wasn’t able to do it. I asked for help from a couple of guys, who had worked on the project earlier and got it done.

I guess this wasn’t something which made Vivek happy. He got hold of me and told me that I wasn’t performing as per expectations. I felt bad initially and was hell-bent to improve on it. I started paying more attention and tried to understand the process. Instead of merely making things work, I was now trying to understand how and why. I worked really hard and was determined to turn around the feedback which I was given earlier.

Then there was a time where Vivek was out due to some personal reason and the project was being managed by Sudesh in the meantime. There were a couple of new requirements, which Sudesh conveyed to me. But along that he said something which just stayed with me:

“These are the things we need to do. Please go through them and let me know how will you do it. Do not write a single line of code until you are sure of the approach. Take your time.”

This was going to be the first time I was to deliver something without Vivek guiding me on it. I took Sudesh’s advice and tried to think over the problem, again and again, thinking about the correct way to do it. And after a couple of hours and dozen of possible approaches, I was able to figure out the “correct” way to implement the feature. I was happy with myself. Sudesh asked to me go ahead with the implementation and I did complete my first independent work.

The deployment is an altogether different story in itself. Since Vivek was out and Sudesh was only taking care of things in his absence, we weren’t sure on how we were supposed to deploy it. The conventional methods were giving up errors and we knew we were missing something. We got late that night. I think we left the office at around 2 AM and it was my first deployment. I was really excited and felt as if I was a part of something and was contributing to it.

Vivek came back and took me to a conference room. He said that he was really impressed with how I had turned the feedback around. My performance was something he was proud of.

I had my eye on it from the interview day and was secretly wishing that I get my hands on one of these. I guess a month after I had joined, there was the quarterly award ceremony and I felt bad because I wasn’t in the contenders. Fast forward, end of next quarter, we were going through the award ceremonies and my heart was beating out of my chest. I wasn’t sure if I had worked hard enough to earn the title of a “champion”. Soon I heard my name, and along with the title. There were praises thrown all around regarding the kind of work that I had been doing.

Till date, I’ve had around 5 Sprint Champions and a couple of Sprint Appreciation awards. Feels good and proud when I look at my achievements. Sometimes when I’m stuck at a problem, I’ve looked up to these trophies and certificates as a source of inspiration.

Growth as an individual

People here at Quovantis are a fun bunch and I feel blessed to work with one of the best leads that one could ask for. These people have been thoroughly and sincerely working on making me grow into a better professional and an even better individual. I’ve been given ample opportunities to prove myself, to play around, to learn, to make mistakes. Never ever have I felt that my creativity or talent is being hushed off. Instead, during the one-on-ones, even the smallest of the things were carefully heard and surprisingly, implemented as well.

I have never been questioned when I’ve expressed my interest in trying out something new or learning a new technology. Instead, I’ve been backed up and guided on how to channel my energy. I’ve done some random things like making a voice-activated Raspberry Pie meeting room recorder. I’ve shifted technologies, I started off with .NET and then moved to Python and now I’m currently working with Big Data stack.

I remember I had expressed that I was a bit shy for public speaking, so to work on that I had been assigned numerous Ignite and training sessions so that I could overcome my fear of public speaking.

Also, there is no dearth of inspirations amongst peers. It is almost a weekly affair when you get to hear about something new, or special being done by one of us. By knowing those people, you get inspired to work harder and better.

People have been asking me why I haven’t made a switch considering that this is my first company and in a space like ours, making a switch every couple of years is quite the norm. Well, it’s because of the people, the culture and the growth that I’m exposed to that I love to work here. It’s not every day that you would get an opportunity to work in a growing company which works on great technologies and gives you the autonomy to work as you like.

I love programming and I get paid for it, what else do I need!