“Play is the highest form of research”

Now it’s time to experience the actual difference between waterfall and agile.

As a Scrum Master I have been coaching people through training and presentations on Agile, convincing them why Agile is powerful than waterfall and assuring them through words that Agile can make a big difference while building a product. But clearly I am convinced that practical implementation (data or facts) has more impact than words, specifically for those who are new to agile. An experienced person can easily relate to the significance of Agile over waterfall by comparing his/her previous involvement in waterfall projects with the current Agile project.

To make Agile learning more interesting, I thought of organizing a workshop where people will learn the concepts of Agile through games and they can compare the benefits of agile over waterfall. I was super excited with the idea of workshop because somewhere it was going to be an add-on to my coaching experience also. With the help of Google and YouTube, finally I came up with the workshop plan.

We divided all the employees into a number of batches in such a way that every batch had 20-25 people and everyone got a chance to get involved in the games. HR team helped me in creating the batches, admin team arranged all the prerequisites to make sure that everything goes as per the plan.

The day arrived when we started with our first batch. At sharp 9:00 am people joined us and took a seat. It looked like everyone needed some caffeine to get charged up. But thanks to our first team building exercise, it worked much better than caffeine to charge them up.

I asked everyone to divide themselves into 4 teams. Every team had to complete the jigsaw puzzle in 15 minutes and the one who finished first would be declared winner.

But there was a trick in the puzzle to which none of them was aware. I mixed 2 pieces from each puzzle to the other puzzles. So to complete the puzzle they had to figure it out and get those 2 pieces back from the other teams.

As the game started, everyone was focused on building the puzzle. Initially the game went smooth, all of them were excited to complete the puzzle. After few minutes one of the team asked- 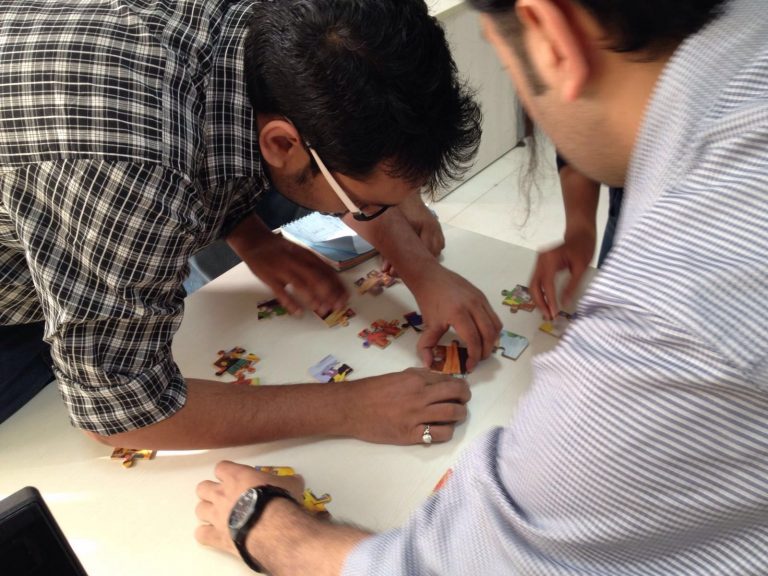 Team : “Are these pieces correct.? We can’t match these 2 pieces with our puzzle.”

Me : “Try to figure it out on your own, you can solve this. Chocolates are waiting for you.”

Then suddenly one of the team member shouted.

Team Member : “Are these pieces mixed?” 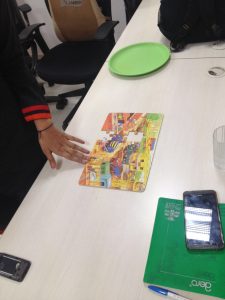 They started approaching other teams to confirm this thing and they came to realize that pieces have been mixed. It created ruckus in the bay and everyone was running to find their puzzle pieces. It was challenging for them to get their pieces back from other teams because everyone wanted to win this game and they were trying to hold the pieces back to block other teams. This way it created the situation of cross functional teams, where each team was blocked by other teams. This usually happens during the product development cycle when teams depend on each other to achieve a common goal.

After a lot of effort one team managed to win the puzzle. Subsequently an open discussion on the challenges they faced to complete the puzzle, led to these learnings-

Here comes the main session of the workshop, where participants experienced the difference between Agile and Waterfall.

Formed 9 members team in which 1 person acted as a product owner and rest 8 persons were divided into 4 teams – Analysis, Design, Coding and Testing. In each team one person acted as manager and another as an engineer.

It’s a game with 3 rounds. I will share the differences in rounds further in this article but before that let me share the basic rules that will remain same in all the rounds. In every round engineers will pick the two coins from both the hands, one coin in each hand, flip them (executing task) and place them back on the table in one row. Likewise they need to process all the coins in 12 rows. Managers will record their engineer’s time taken to process all the coins and product owner will record the total time taken to complete all the phases (analysis, design, coding and testing).

In this round analysis engineer processed all the 24 coins and arranged them in 12 rows by flipping the two coins at a time as mentioned above and analysis manager recorded the total time taken by an engineer to complete his tasks. When analysis engineer started the task he said “Start”. Once the analysis was done, design team started processing all those coins and similarly design time was recorded by his/her manager. Same goes for coding team and testing team. Next team didn’t start until the previous team finished all their tasks. When testing team completed all the tasks, engineer said “Stop”.

Product owner recorded the time taken to start and stop.

On white board following results were recorded –

In this round, I asked them to make a slight change. When analysis engineer completed the execution of 12 coins, meaning when he processed the 6 rows then design team started working on those 6 rows and analysis engineer kept on working with remaining 12 coins and when the analysis of these 12 coins was completed design team picked those 6 rows. Rest process remained same, managers measured total time taken by their engineers to process all 24 coins, analysis engineer said “Start” when he began it. When it came to the testing team, engineer said “First iteration completed” when he completed the first 6 rows, that time product owner took a lap and recorded that time. Once all the 12 rows completed, testing engineer said “Stop” and product owner recorded the total time.

On White board following results were recorded for 2nd round-

In this round I asked the team members if they could help me to get the best results. They quickly came up with the idea to start parallel processing right after the single row. Now I believe they knew the reason of doing this. They executed the plan and this time first lap was taken when single row was processed by the testing team. 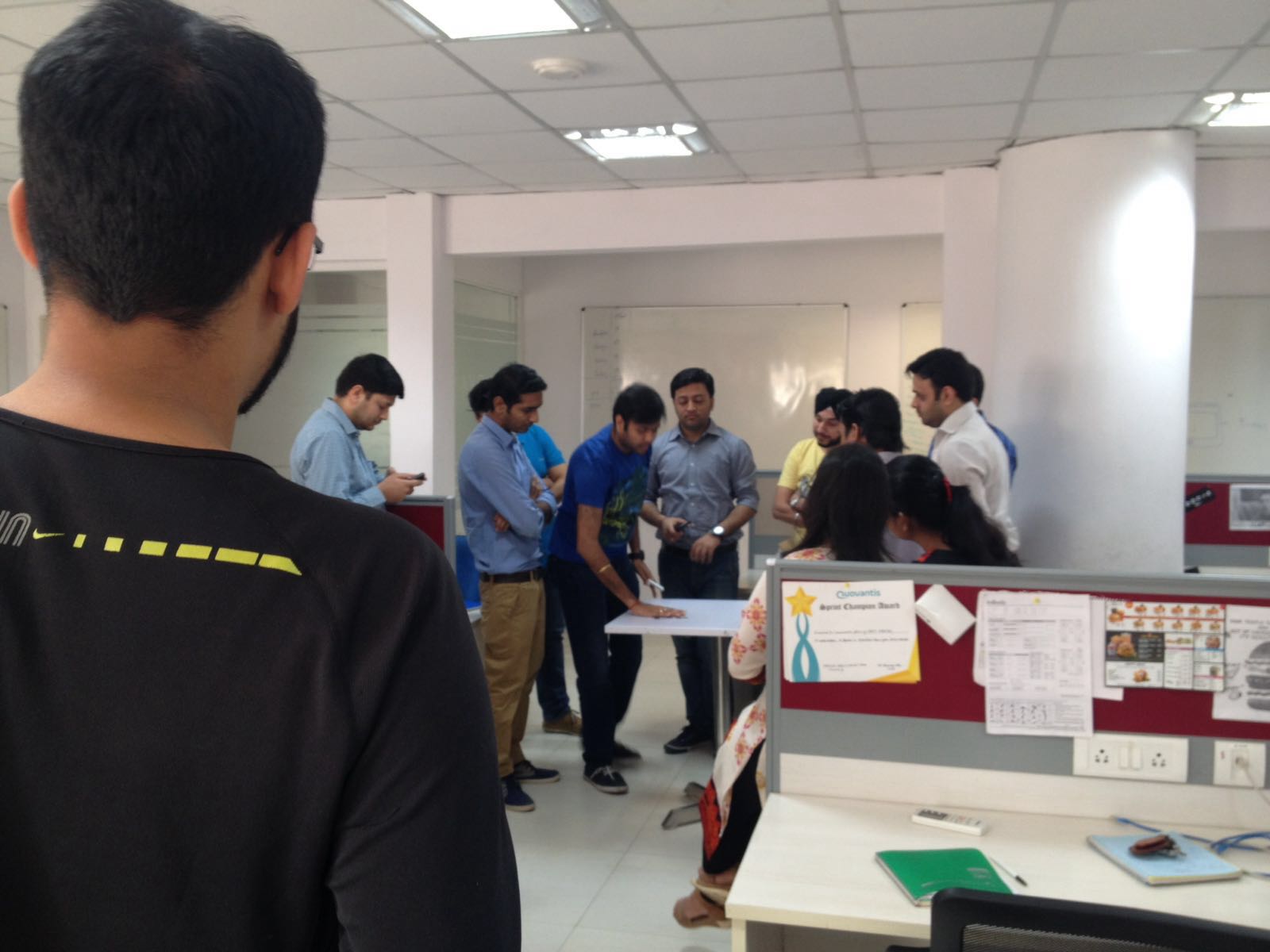 Observations made by the participants

Take away from this exercise-

For this game I asked 12 people to step forward, priority given to those who didn’t get chance to participate in the coin game. Divided them in 2 teams. Out of 6 members in each team 1 was a manager with timer and other 5 formed a circle.

In this game they need to pass a ball to each other in such a way the ball path form a star in the air. And the person who started passing the ball, received the ball back after completing the one round then it means first task completed and likewise they need to complete 8 tasks to build the complete product. They have to make sure that ball should get processed, means it should travel through air in every pass. Managers of both the teams need to record the total time taken to complete the 8 rounds (tasks).

Round 1 – Total time recorded on white board.

It was great fun and fast learning for everyone.

We got a very positive feedback from everyone on this workshop. Now we are getting ready to organize more workshops like this.