Design and Mythology: 5 designer personas you need to build a great design team 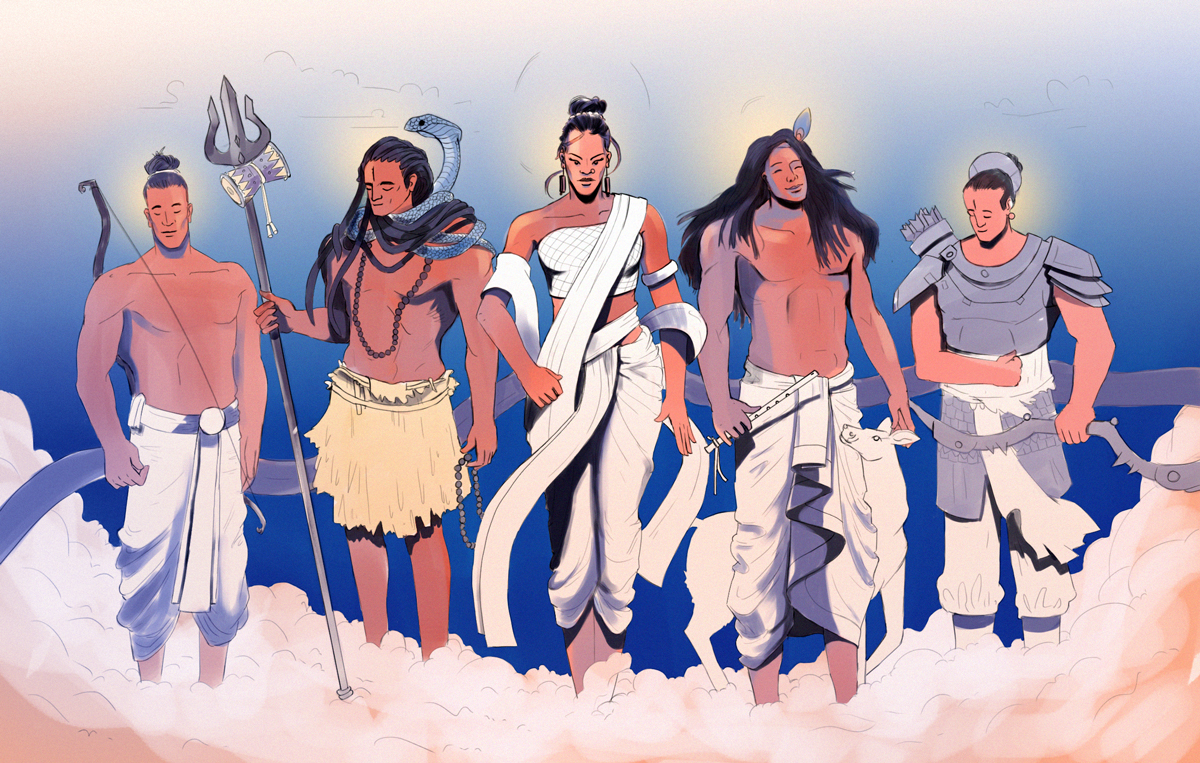 We have been storytellers since the time it was fashionable to call caves ‘home’. We used stories as a medium to find not only meaning in life but our place in the cosmos. And we passed on the stories of mythical righteous characters from one generation to another so that people could imbibe their traits.

We use the same imagination — the one we used for mythological storytelling — to design, and create a better world for us.

“Design and Mythology are both media for storytelling that represent general cultural truths and their human meaning. Like design, mythology is a universal language by which to decode human culture.”

Design and mythology’s inter-twined cultural ancestry’s proof is that ancient Greeks even had a God for artisans, sculptors, or anyone with a feigned interest in artistic creation — Hephaestus.

But hey, this post isn’t about ancient Greek Gods. I want to stay closer to my cultural heritage and share the kind of designers we all need.

Lord Shiva, the destroyer & the transformer

When people hear ‘Shiva’, they visualize a blue skin ascetic with long dreadlocks, wearing tiger-skin clothes, and living in the snow-clad Himalayas.

But that would be staying on the surface of what Lord Shiva is all about. He is a powerhouse of energy, the protector, and has the power to transform the universe by destroying it.

A destroyer? Isn’t ‘destroyer’ a frightening trait for a designer? Not really, because transformation isn’t possible without an act of destruction first.

What I mean in the context of a designer is this: A designer with the ‘Shiva’ personality doesn’t get attached to their creation. They create designs, seek feedback, and don’t shy away from discarding their entire creation to start all over again. And that too, enthusiastically.

They understand good designs do not evolve overnight, but through a slow, iterative, messy, and often frustrating creative process.

The ‘transformer’ trait of the Shiva personality helps them create a delightful design out of the graveyard of rejected designs.

When you ask about their design process, they won’t pretend they got to the final design through some magical divination. Rather, they share their messy creative process, or how their first set of designs were a colossal disaster. As if they like wearing the badge of failure — with honor.

They listen intently when you critique their designs and deliberate on them. It wouldn’t be a surprise if they say: “Gee…You know what, you are right. Your suggestion would have solved the problem more elegantly.”

Mahabharata is a spellbinding epic of the battle of good over evil.

And Arjuna was the bonafide one-of-a-kind legendary archer. Trust me, our beloved Hawkeye from Avengers is a pale imitation of him. The legend is that Arjuna’s enemies feared for their life after just hearing the twanging of his bow’s string. Anyone fighting him got into the fastest lane to snuggle in their grave.

There are riveting tales not only about his legend but intense focus on his craft.

Chances are you would have heard this story: Guru Drona (his teacher) perches a wooden bird on the branch of a dense oak tree and challenges all the students to pierce its eye. The students had to perform this heroic feat while standing a few hundred yards away from the tree. A classical ‘Enemy at the Gates’ kind of training, you know.

Before they aim, the Guru asks every student what they see. Everyone narrates similar visuals: they see the lush green field, the majestic tree, green leaves, and of course, the hidden bird.

No wonder everyone fails miserably whereas Arjuna breezes through the challenge — piercing the bird’s eye in the first attempt. Talk about having laser-sharp focus.

My point: every design group needs designers who embody Arjuna’s spirit– intense focus on goals, exceptional designs every single time no matter how daunting the task, and maniacal focus on deliberately practicing their craft.

You look at their designs and can’t help but marvel at the shimmering magical quality of it. When someone says if you know a great designer, theirs is the first name that comes to mind.

Their designs would have a magical quality. It would be stupendously hard to find even an out-of-place pixel in it. Every aspect of the design would feel rational yet intuitive and would make you feel like they truly got married to the product.

They will share examples of them tinkering with a new way of designing or their passion for learning by devouring books.

And when you look at their Dribbble portfolios, you won’t find design examples of fancy Nike shoes, and Food delivery apps unless they genuinely designed that app for Nike or were the co-founder of Zomato. On that note, when would we stop littering our portfolios with such examples — does our Dribbble community need yet another example of a Nike shoe app?

Lord Ram was a responsible son, devoted husband, loving brother, and above all, an exemplary leader – someone who led by example.

As a young crown prince, he accepted dethronement to fulfill a promise his father made- showing wisdom beyond his years and his deep sense of honoring commitments.

When Ravana kidnaps Lord Ram’s wife, Sita, Lord Ram builds an army of monkeys, coaches them, makes them believe in their power, leads them to build a stone bridge over the Indian Ocean, and guides them to victory against a massive demonic army.

Revered by everyone, he was humble and attributed his successes to those who helped him in his cause.

They could have many avatars but I feel most of them start their sentences with “we”. Not “me” or “I”.

When the conversation slips deep into their leadership journey, they share how lucky they have been to inherit and manage a great team. They constantly gush about how it was the team that was primarily responsible for creating compelling design outcomes. Even though you can feel that they were the guiding force behind those designs, they won’t let the spotlight fall on them.

But if you would ask them about failures, they step ahead and call them their own. Not their team’s.

You won’t help but be blown away by their care for the team, empathy for the users, wisdom beyond their years, and humility.

In the epic Mahabharata, Lord Krishna helped the Pandavas, especially Arjuna, with his strategic insights to win the fight against their evil cousins, the Kauravas.

From coaching them on the merits of unity to boosting the morale when the chips were down, to helping Arjuna focus on the path of Dharma (an entire epic of Bhagavad Gita is a result of that dialogue between Krishna and Arjuna), to finding the strategies to break the impasse – Krishna was the one who showed the way.

Every design team needs a Krishna. A ‘Krishna’ kind of personality uses their diverse experience to understand the big picture, get to the root of the problem, and then use their master storytelling techniques to bring others to the same page. They empathize with users’ problems and put together effective user experience strategies to design the simplest possible solutions. They help the team stay motivated and overcome their fears of working on challenging tasks.

When you start talking about their designs, they would share the UX strategy right from the inception to the finish line. Their UX would seem well thought out and their copywriting perfect.

They would have a montage of eclectic experiences and insightful strategies in their back pocket to overcome challenges related to design processes or the team.

Analytics and usability testing would be their favorite topic as it helps them realize the efficacy of their designs.

Mandodari, the voice of courage

In Ramayana, Mandodari is the devoted and righteous wife of Ravana, the evil king who abducts Lord Ram’s wife, Sita.

Mandodari is brave, righteous and speaks her mind, whenever she sees anything wrong. She chastises Ravana whenever she catches him in any devious, duplicitous, and dishonest acts. She voices her opinion honestly, without fear of Ravana’s authority or retribution.

True to Mandodari’s traits, a designer with her personality is fierce, devoted to her craft, stands for what is right, and is confident. She is not only an outstanding individual contributor but steers the team towards the collective goal, whenever the team wavers. She personifies the spirit of an ideal team member and does not shy away from giving critical feedback.

Don’t be surprised if they start taking your interview! Asking questions about how the company, the group, and the design process works. They would seem authentic and you won’t feel that they are putting on a facade for this interview.

Your team will be unstoppable if it has all these personas. And your team would do groundbreaking work if your team members embody the spirit of all the legends that I’ve shared above.