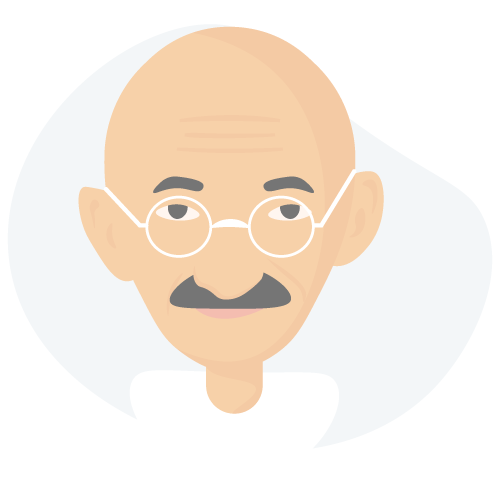 Gandhi and one of the greatest leadership lessons

A mother was frustrated with her son’s sugar addiction. No matter how hard she tried, she couldn’t wean him off it.

Worried about his health, she thought of reaching out to the person idolized by her son- Mahatma Gandhi, the most respected and revered freedom fighters of India.

So she gets on a journey of hundreds of miles barefoot with her son to see the Mahatma and to request him to cajole her son into leaving the habit (secretly wishing there was a device to show all the nearby horse carts on a map which she could share with other travelers).

After reaching his Ashram, elbowing other fans out of the line, she seeks an appointment to see the Mahatma.

Both of them sit on the concrete floor along with Gandhi, while he spun cotton on his famous Charkha.

The Mahatma looks at them lovingly, raises his eyebrows to form an expression of- “How you doin’?” The mother shares the son’s sugar addiction and asks the Mahatma to tell the son to kick the habit.

After hearing the request, the Mahatma becomes reflective, strokes his chin, like Steve Jobs, takes a deep pregnant pause and finally says- “Why don’t you send me a calendar invite for a meeting after 2 weeks and I will have a solution to your problem”. And then gets up and leaves. Probably for another meeting. Or, a bio break. It was such a long time ago that no one really knows why he left in such a hurry.

The mother was puzzled yet excited. Probably she thought some magical solution will appear after 2 weeks. So she starts the journey of hundreds of miles back home only to return after a couple of weeks on the designated date and time.

Just like the last time, both of them sit in front of the Mahatma. She makes the same tell-son-to-kick-the-sugar-addiction request.

Gandhi, like Al Pacino, looks at her son and says- “Sugar is bad for you, son. Please do as your mother says. No more of sugar going forward.”

And then looks at the mother as if saying – “You see. That’s how I roll!”

But the mother is livid. She asks Mahatma if he only wanted to say those three sentences, why couldn’t he say it two weeks ago? Why did he have to make them walk hundreds of miles again?

Mahatma calmly says- “But how could I? I used to eat sugar then.”

The lesson- You must be your #1 follower.

When I was promoted from a software engineer to a lead in the late 90’s, I thought leadership was all about setting the rules of the game for the team. And sometimes giving feedback when someone didn’t honor those rules.

Of course, it didn’t work. Because no one followed the framework that I had set. Why would they have, when I wasn’t following it myself?

It was during that time that I read Gandhi’s story and found it to be such a profound example of leaders living the values they espouse in their followers. It didn’t take much time to realize that not only I was setting a bad example of leadership, but also weakening my bond with the team.

I realized that great leaders embody the qualities they want their team members to imbibe. It changed my belief that leadership isn’t about authority; it’s about authenticity. And your actions build that authenticity.

“If your actions inspire others to dream more, learn more, do more, and become more- you are a leader.”

A leader can’t inspire others to become more if the leader doesn’t follow their own advice and backs it up with great action.

How can a leader, who isn’t punctual, ask the team members to respect time?

How can a leader, who doesn’t believe in reading habitually, ask the team members to read every day?

How can a leader influence others to practice excellence, when they themselves worship mediocrity?

My point- a leader can’t bring about a change without being the change themselves. Or to sum it up in Gandhi’s words- “You must be the change you wish to see in this world.”