How to tell a story with motion graphics (Part 2)

Do I really need to tell you why motion graphics is the most sought-after field for creating a compelling story or building a brand’s image? I guess not. There is absolutely no doubt that people are watching more videos than ever. They are quick, resourceful, entertaining and impressive (if designed well!). For the same reason, brands are adopting motion design into their marketing strategies. And why wouldn’t they? They are a great way to grab people’s attention.

Aren’t you a fan of those really attractive and cool animation sequences in movies, advertisements, cartoons and other mediums which look so amazing? Don’t you feel that urge to share it immediately because that compelling storytelling struck a chord with you?

As a motion designer, the first thought that comes to my mind is– “Wow man! I want to make some of these myself.” Wishful thinking, I know. But, over a period of time, I have come to realize that if you have clarity on what, why and for whom you are trying to make, you will get astounding results.

In my last blog post, I wrote about a structured approach to start with creating motion graphics i.e., Conceptualisation, Storyboard, and Design. This is just the take-off point, but a crucial one. So you can’t afford to miss this. And once you are through with this part, you now need your wand to cast the magic, as I like to call it.

Allow me to walk you through this process through an example. 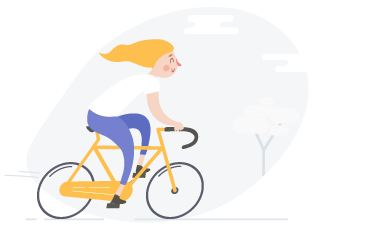 I created this graphic for my previous blog and I thought it would be interesting to see some action (also fits the whole theme of things). So I decided I wanted to move her legs while she is pedaling and put some wind in her hairs to make it look real.

I started with creating graphics in Illustrator, Photoshop, and Sketch and finished it by adding motions in After Effects. Before moving forward, I am just assuming that you have a basic understanding of digital Image production i.e. you are aware of what a canvas and a timeline is.

So below is a sequence of steps for creating this motion-

While creating an animation in After Effects, the first task is to create separate elements of the object that I am animating. This helps when I import the file into After Effects. These elements can now be controlled individually as required. In the screenshot below, you can see that I have the front wheel, the back wheel, peddles, hair, face, legs and the background in separate layers. These are the elements that I plan to animate. 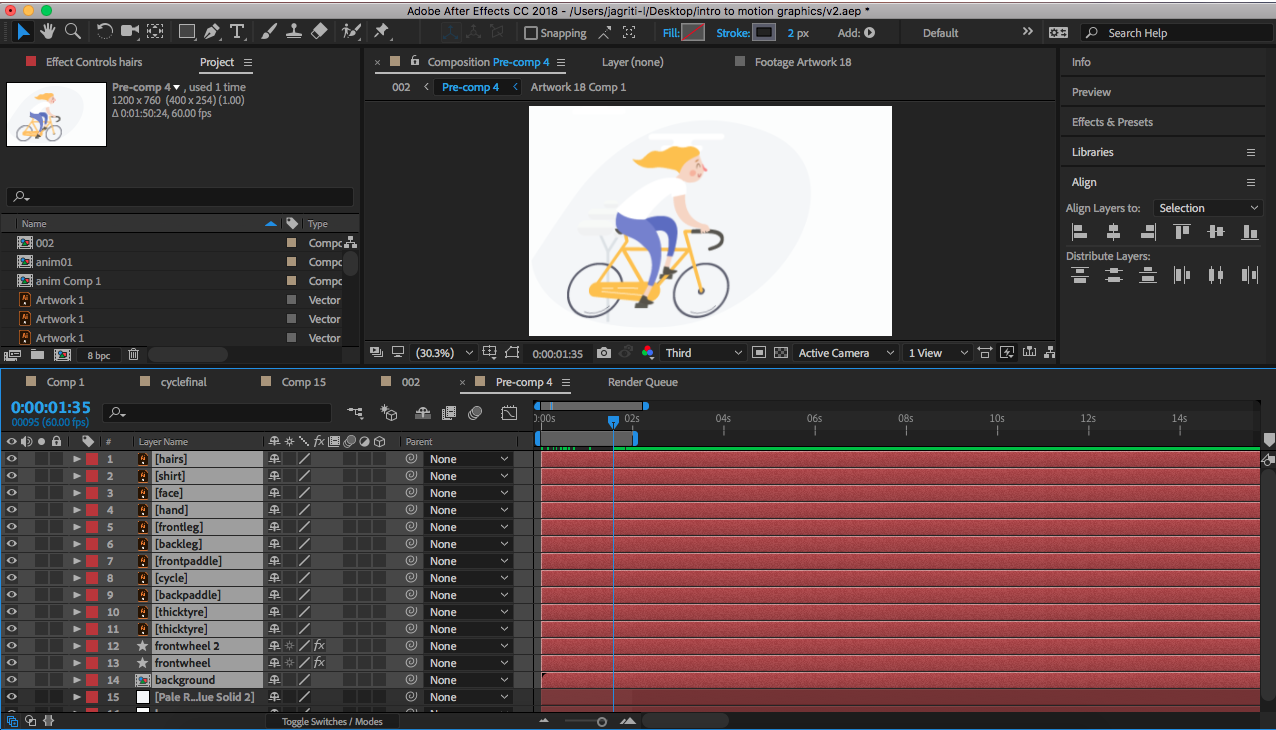 In any animation, timing is the primary factor which gives meaning to the motion. Through timing, we can shape the personality of characters and their emotions in the manner required. In this animation, I have to sync the movement of the character’s legs, the pedals and the wheels of the bicycle in such a way that they rotate at the same place in tandem. This is the same effect that we see in real life.

You need to have a time scale in mind to create an animation. This can be a thirty seconds small clip or a two-hour long movie. This also helps us in deciding the timing for individual frames.

Within a scene, each action can be broken down into smaller parts. In my example, that action is cycling. So if we break this down further, we will get the following-

A simple animation effect can be achieved by following the steps above. The final step is to export the file in the required format.

I gave you a very basic understanding of animation and a short tutorial on how to make one. There are many tools which you can play around with, but what matters most is not the tool but the artist behind it. I hope this helped you in exploring the fun possibilities you can have while animating.

Let me know in the comments below if you found this useful. If there’s anything that you would like me to take up in the next blog, I would be happy to write about it.