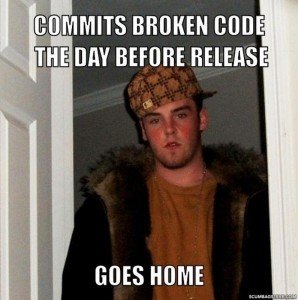 For starters, let us first define what is continuous integration. According to wikipedia “Continuous integration (CI) is the practice, in software engineering, of merging all developer working copies with a shared mainline several times a day.”. This basically means that if several developers are working on a product/ application , we need to make sure that the individual changes, or the different changes, when merged do not break at least the core functionality of the application.
As the dependency of the application you are working on grows, more is the business risk associated if something goes wrong. Imagine one day if Google decides not to work, most of the population would like to believe this is the start of the apocalypse.

CI comes in here to the rescue. Here’s why you need to integrate CI into your application.