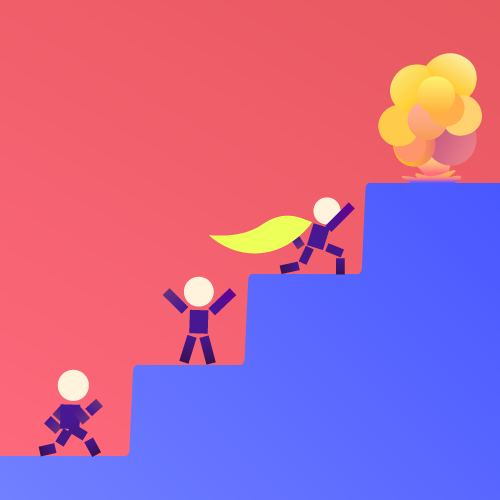 “How did he get promoted?”

This question has been asked at least a bazillion times in the corporate hallways and around water coolers in hushed tones (source needed).

For the curious, it ain’t a compliment. One isn’t interested in knowing their mantra of success and how could they bear the intense hardship of a regular cubicle job to get to their position of power.

If you were listening to the watercooler-chat closely, it’s generally said with the roll of the eyes, raised eyebrows or with a chuckle. Or sometimes, all of them combined. Dramatic, I know!

What they really mean is – “how on earth did they hire this bozo?” or, “whom did he have to suck up to get promoted to this position?”

You see now, not a compliment.

I feel terrible every time I hear it being said for someone. I do. It’s like they don’t realize the Newtonian laws of (pro)motion.

In our modern hierarchical organizations, we are promoted to a better title (and salary) when we kick ass in our current position. Shine like a star, you know.

But, over the years, after climbing the corporate ladder through promotions we get to a position where we turn out to be umm…what’s the word for it — oh yeah, useless.

Do you know there is an actual principle created by Dr. Lawrence Peter, which states this effect/phenomenon- “In a hierarchy, every employee tends to rise to his level of incompetence”? Ouch.

And, this principle is known by a not-so-obvious name Peter Principle. Whoa! Who could have imagined a principle named after the person who created it?That rarely happens, you know.

Well, if you are in tech, you would see the following phenomenon played over and over – a software engineer becomes Sr. Software Engineer by consistently introducing lesser bugs and shining in meetings by saying things like Scalability, Algorithms and ohh…Minimum Spanning Trees. Yes, definitely something to do with Trees.

We know it’s time to promote them from Sr. Software Engineer to Team Lead when they start saying things like Collaboration, Cross Pollination, Synergy, Customer Success and develop an ability to blame others or circumstances when faced with failures.

Of course, I kid. But I’m sure you get the drift – Perform at an exceptional level in your current role and get promoted. Rinse, Lather, Repeat. And, then after getting several promotions — damn, Hello Peter!

Maybe, now you can see that most of the times the individual getting promoted didn’t have to suck up to anyone or have beers or chai with their manager. It’s just the way hierarchical organizations work. It’s the way of the organization to recognize your effort and applaud you for giving more responsibility, better title and salary.

But, how to discover if you have been stung by Peter’s Principle and cure it –

1. Look out for the signs around you

Do you constantly feel exhausted? Are people around you happy? Do they feel at the top of the world when you don’t show up for work? Are they leaving the organization in numbers?  Yeah, you can take these not-so-subtle clues and notch up your game in the new role.

Hey, at least, someone recognized your effort in the current role and promoted you. Be grateful. Someone genuinely believes that you would do great in your next role too. You are getting a chance to learn new skills or unlearn the old ones. The entire corporate world pushes us to become one trick ponies. Thus, for heaven’s sake, please show some enthusiasm about it! You have been good so far, you’ll do wonders again.

3. Find out areas which need development

Do you like solving puzzles? Consider this role as a puzzle that you have to solve. Find out what is involved. It’s a great chance to talk to other people in similar positions. Find out what new skills you’d need to do the job effectively. If you have been promoted to a role of Team Lead, find out how to conduct 1:1s, how to handle conflicts and negotiations, how to motivate people, how to give them feedback. Simple advice – Be insanely curious.

4. Turn down the offer

If nothing seems to work out then I’m sure you’ve heard the phrase ‘Inverse promotion’. If you really feel that you are not suitable for the role, turn down the offer and step down. You’ll do great service to yourself and your company by not accepting the role for its glamor. Probably, now they will find a person who is competent for this job.

I know promotions become hard to celebrate sometimes. But you know what- corporate life is not as fancy as they sell it in those life-hacks articles. You have to get yourself into the mud, get dirty, learn and unlearn. All I want to say is- If the role isn’t for you, have no shame in turning it down. If the role is made for you- let no one stop you from learning new skills and conquering the world.

More power to you.