Ringelmann Effect: Why small teams are a strategic advantage 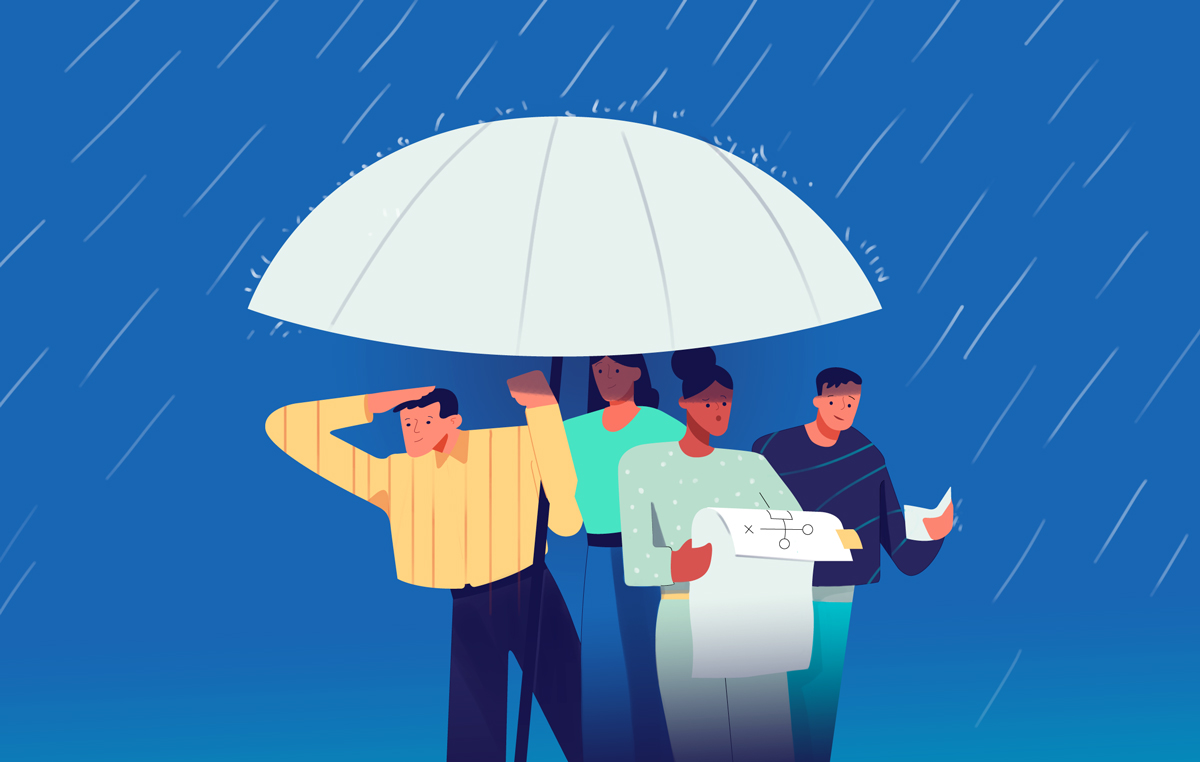 Entropy happens. Be it in our universe, or in isolated systems like organizational teams.

And when entropy happens in teams — generally as an outcome of unexamined accelerated growth — it not only impedes progress but creates chaos and confusion. Over a period, it makes team members scream: “what the hell is going on here?” And if left unchecked, leads to huge cracks in a team’s foundation — and productivity.

There are many strategies to combat entropy. But one of the easiest is to tackle team composition. Scratch that. I meant team’s size.

Team Size? Wait a minute. Does that mean a team shouldn’t grow?

No, I’m not suggesting that. I’m suggesting being conscious about your team size like a Red-Black tree is conscious of its balance. It constantly rebalances itself when a node gets inserted or deleted.

But, why small teams?

Maximilien Ringelmann, a french professor, discovered this effect through a simple experiment.

He asked two groups to pull at two different ends of a rope. He found out that if there was just one person at one end, they gave their 100%. This percentage kept on decreasing as he added more people. 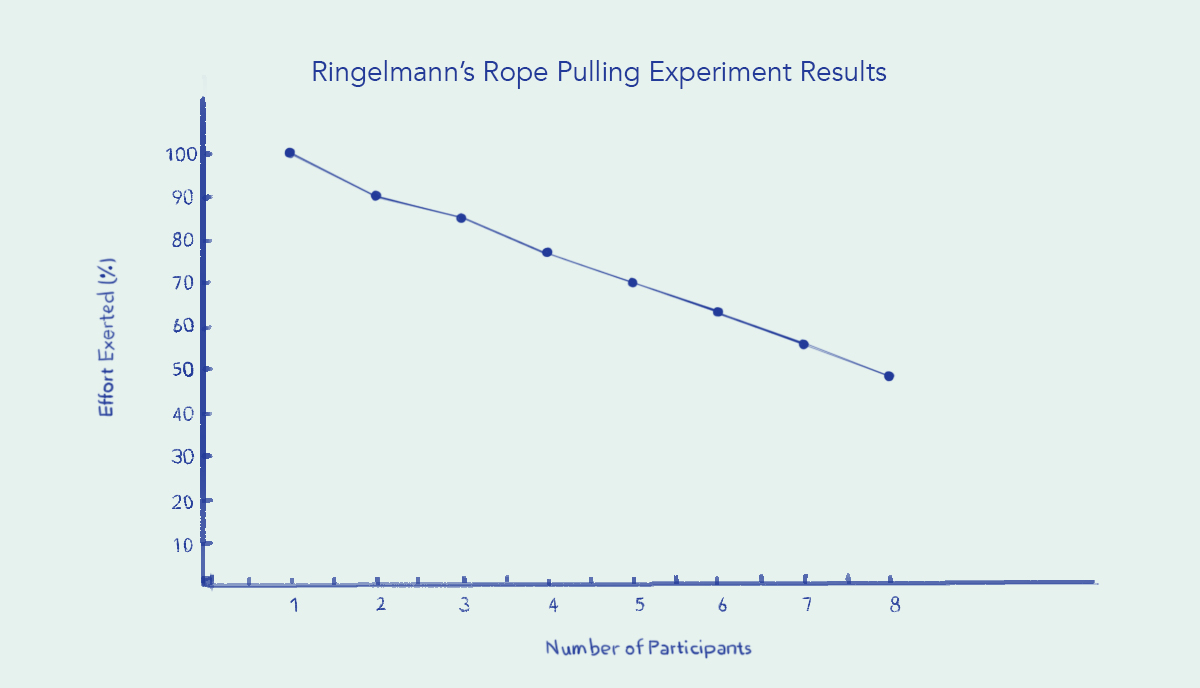 The reason is obvious: when there is just one person contributing, they give their 100% knowing success or failure depends on their efforts. But as more people join in, that emotion gets diluted. They feel if they slip on their commitments, there would be other team members to handle their slack. If they slip on the quality, there would be others to help fix the problem.

You see this happens subconsciously, because they are not the only ones holding the key to success anymore — it is now a collective responsibility. Like their subconscious understands they are now playing multiplayer rather than a singleplayer game.

Ringelmann isn’t the only one to promote this philosophy.

Scrum, too, advocates a small team as a tenet of success.

And Jeff Bezos also feels smaller teams are the cornerstone for success. He invented the very famous two-pizza rule that says: if a team cannot be fed by two large pizzas then it’s too large to function properly.

Lab experiments or Scrum philosophy aside, there is enough evidence of it in the real world: startups outrun bigger organizations in the race for disruption. This happens because small teams — design or engineering — have a significant advantage on the 4 key attributes below.

The bigger the team, the tougher it is to create alignment. And lack of alignment makes it tougher to create an optimal impact.

Elon Musk’s guidance of ‘people are vectors’  best explains why aligning your team is crucial to success.

He says that every person in a team is a vector and a team’s progress is a sum of all those vectors. If everyone in the team is aligned, their combined efforts create the most optimal impact. But if people are misaligned towards the team’s north star, their efforts don’t add up. Rather, following the rules of vector arithmetic, their efforts cancel out and create a suboptimal impact.

Creating alignment in a small group is relatively easier. The reason is simple– more the number of people, more effort is required in trying to nudge them in the right direction. The fewer the people, the easier it becomes to coach them towards your north star.

The bigger the team, the exponential is the communication effort for effective collaboration.

In computer science terms, communication has the big O of n squared a.k.a O(n2) complexity. Every addition to the team increases the communication overheads exponentially.

This isn’t just my observation. Harvard professor Richard Hackman who studied the key challenges of working in large teams said, “My rule of thumb is that no work team should have membership in the double digits (and my preferred size is six), since our research has shown that the number of performance problems a team encounters increases exponentially as team size increases.”

Even Scrum rituals, like daily standups or retrospectives, take more time when the team size starts expanding. (It’s not a surprise Scrum advocates limiting a team to a maximum of 7 individuals). As a result, the bigger the team, more time is spent in communication, which leaves lesser time for development.

So being lean is a strategic advantage as it adds significant velocity boost for the team.

The smaller the team, the tighter they are bound to each other.

Imagine a team as an atom, and the people as electrons.

As the team increases in its size, the distances between the electrons i.e. people, and the nucleus of the team starts growing. Some of these electrons potentially become loose, and jump from the outermost orbit to another atom (another team or another company).

Whereas, in small teams people are tightly bound to each other as they spend a considerable amount of time together. With fewer people on a team, it’s easy to get to know one another, ask for help and share ideas. And it helps create strong bonds that take the team to the state of success.

The smaller the team, the easier it is to build consensus.

Building consensus is a herculean effort in big teams. From finding a schedule that works for everyone, to soliciting everyone’s opinion, resolving opposing opinions, closing in on a decision – every action is akin to pushing boulders uphill. And even when you manage to close, to its team members, the outcome feels like a patchwork of compromises. No one goes back home happy. No one goes back with a 100% buy-in.

In a small team, fewer the number of people, lesser is the back and forth. It’s just easier to gather everyone, find a common ground and arrive at decisions.

If you are in a leadership position, it is pragmatic to organize your big team in smaller pods. With the smaller pods, it is easier to create a shared meaning and help everyone understand their responsibilities. Then come up with ceremonies, like scrum of scrums, for these pods to interact with each other and see if they are all marching in the same direction. And then hopefully, despite the growing size, you will realize your vision for success.