UX lessons from designing and developing an app on Lucid Dreaming

The discovery of the Benzene ring by August Kekulé has a very interesting background story to it. At Benzene symposium in 1890, Kekulé revealed that while working on his research there was a time when he was unable to move forward. His body (and probably the mind as well) were tired of multiple attempts. However, one day he had this very peculiar dream. The dream of a self-devouring snake in which the snake was biting its own tail. The vision of this snake, Kekule said, led him to the cyclic structure of benzene ring.

Mathematics genius Srinivasa Ramanujan, who made significant breakthrough discoveries in Number theory, claimed that Hindu goddess Namagiri would appear to him in his dreams and present him with the formulae. He would check them after waking up and they would always work!

A similar story is by Sir Paul McCartney, member of The Beatles at that time. He said he dreamed the melody of the well-known song Yesterday (1965 album). In his own words- “I had dreamed it. I couldn’t believe I was capable of it. So, I got out of bed, sat at the piano, found G, found F sharp minor 7th – and that leads you through then to B to E minor, and finally back to E. It all leads forward logically.

I know all these stories sound implausible. I, too, had a hard time believing them. It was only after we started working on the UX design of an app that closely resembles this, we began to understand that there is a science behind all of this. 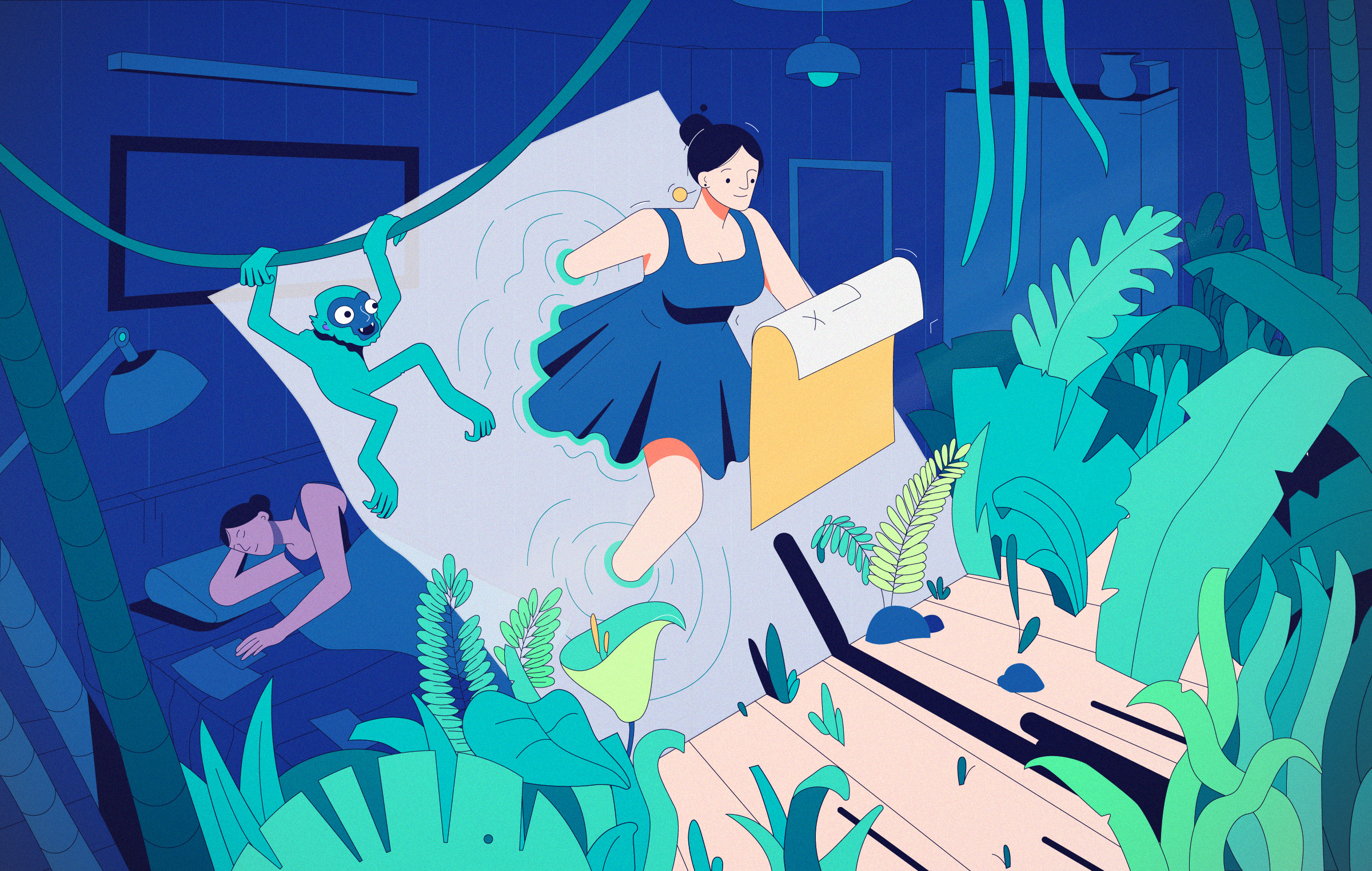 Lucid Dreaming is not magic. Lucid dreaming is a dream where one knows that they are dreaming and hence, can control the events/actions in the dream. Pretty much similar to what you saw in Inception!

Sounds interesting, right? The concept of Lucid Dreaming dates back to a thousand years, yet it’s only been thirty years since it’s scientifically validated.

So, when we got an opportunity to work on this project, I was both happy and clueless. Happy, because I knew it would be an incredible experience. Clueless, because before this, I had never heard about Lucid dreaming.

Our partners recently launched the Lucid Dreaming mobile app on the App Store and it’s one of my most gratifying works so far.  Nonetheless, as it’s usually said, “hard work gets paid off”, it certainly did in our case as we received India’s Best Design Awards 2019 for Lucid Dreaming.

First, just to give you an idea on how the app works — There are certain steps that one needs to follow to start lucid dreaming.

At first one has to come up with a problem that they want to solve with lucid dreaming. It could be anything from a challenging work problem, learning to swim or improving one’s speaking skills. Once you have decided on the problem, decide when you’ll sleep, set an alarm for at least 4-5 hours after you sleep and select a totem sound to help you recognize if you’re dreaming or not.

Upon hearing the totem sound you’ll also have to perform a reality check, like Read. So, for instance, if your totem sound was Meadow, then your reality check would be “Can you read a sentence twice without changing it?”

If you can do that, you’re in the dream. Whatever you do in this dream, remember it and record it in your dream journal when you wake up. Keeping a dream journal helps you analyze and help you control your dreams.

I have so much to share, so much to talk about. But I’ll just talk about our learning of designing an app which is not trying to solve any problem. Rather, the idea of the app is to unlock a whole new world to people who don’t know anything about it. So, here’s the list of lessons we’ve learnt from Lucid Reality.

Our partner’s idea was to build a mobile app which helps users (both novice and practitioners) realize the power of lucid dreaming and practice it with ease.

The first challenge that we faced was understanding what ‘Lucid Dreaming’ was, how does it help people, why we needed such an app and for whom are we designing it?

On the surface, lucid dreaming seems simple and fun but the science of Lucid Dreaming is complex. So, we spent a few days reading research papers, familiarizing myself with the terminology used in this field (Targeted Memory Reactivation, REM, Dream recall, Dream Journal, Lucid recognition, Lucid prolongation, etc.), and gathering information about apps that already exist in the market.

This helped us gain some basic understanding and get into conversations with our partners who are experts (Neuroscientists, seasoned business executives, and life-long lucid dreamers) in this field. They have years of experience in teaching people how to Lucid dream. Therefore, understanding their vision and getting on the same bus as theirs was of utmost importance to me.

We even tried to Lucid dream. I didn’t succeed but it helped. It really really helped!

Understand and decide on the problem statement

When you’re deep down in the research phase, it’s easy to get swayed by the new things you discover. The more you read, the more you’ll know. Eventually, you’ll identify more gaps in requirements. While that’s a good thing, it causes unwanted delays and it becomes difficult to settle on just one problem.

It happened with us well. We wanted to solve every problem. For example- there was no way for novice users to learn what steps a dreamer has to take to start lucid dreaming.

So, we took a step back and defined a concrete problem statement- do we want to teach them theoretically about lucid dreaming? Or, is there a way we can make the UI interactions so intuitive that they don’t really need all that knowledge?

We chose the latter! 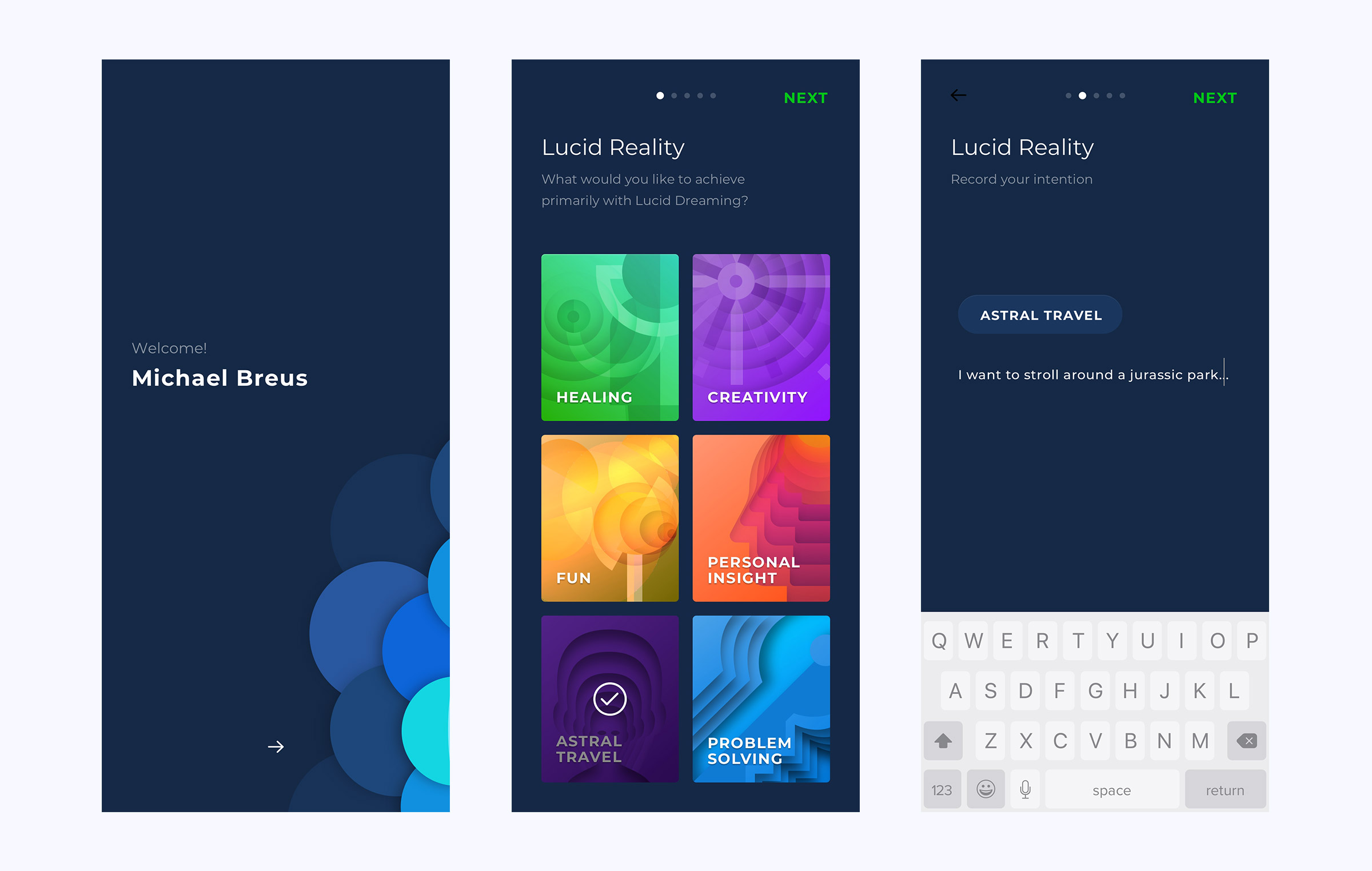 Lesson learned? A problem statement will help keep your wandering instincts in check. So, always define what problems you’re trying to solve for your users. Write them on paper, if you have to, so that you’re glued to the problem, not to your assumptions.

Empathize with your end users

The targeted users of our app are either pro-lucid dreamers or beginners who are new to the realm of lucid dreaming. So, for us, the challenge was to design this app with an immersive user experience so that users of every persona– beginner or experienced– feel compelled to accomplish tasks in their dream.

For instance- we have chosen the sans-serif font for our app. Since the users will be using the app at all times- during the daytime as well as night, we didn’t want them to lose their attention to curvy font styles. The sans-serif font improves readability and helps grab users’ attention quickly. 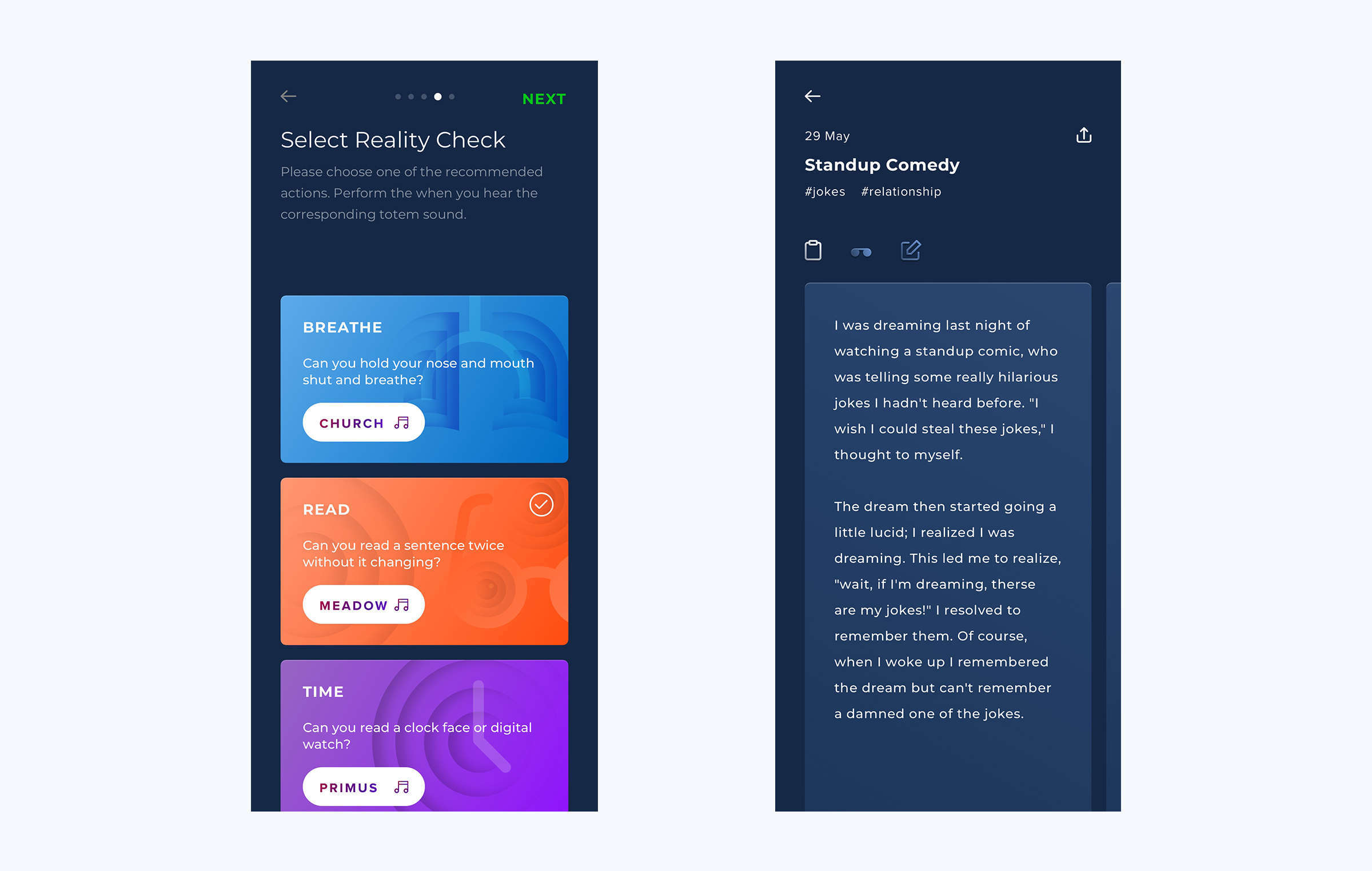 We also gave a lot of thought to the placement of buttons and cards. They are ergonomically placed in a way so that it’s easier for the user to tap and swipe without using the other hand.

Lucid Reality is a task-driven app. Users have to select amongst choices and based on the choices they make, they are asked to provide inputs. Keeping that in mind, it’s chunked into steps to help users accomplish one task after another, without making them feel overwhelmed by too many things. The two action areas for users are-

When the user is prompted to set the intent of the dream, there are a few things he/she needs to do- set what he/she wants to dream about, set reality checks and bedtime indicators.

For setting a reality check, we designed a simple circular controller to set the start time and end time. It turns red when a lucid dreamer sets anything less than 8hrs of start and end time because that’s the ideal range in which a person should hear totem sounds. 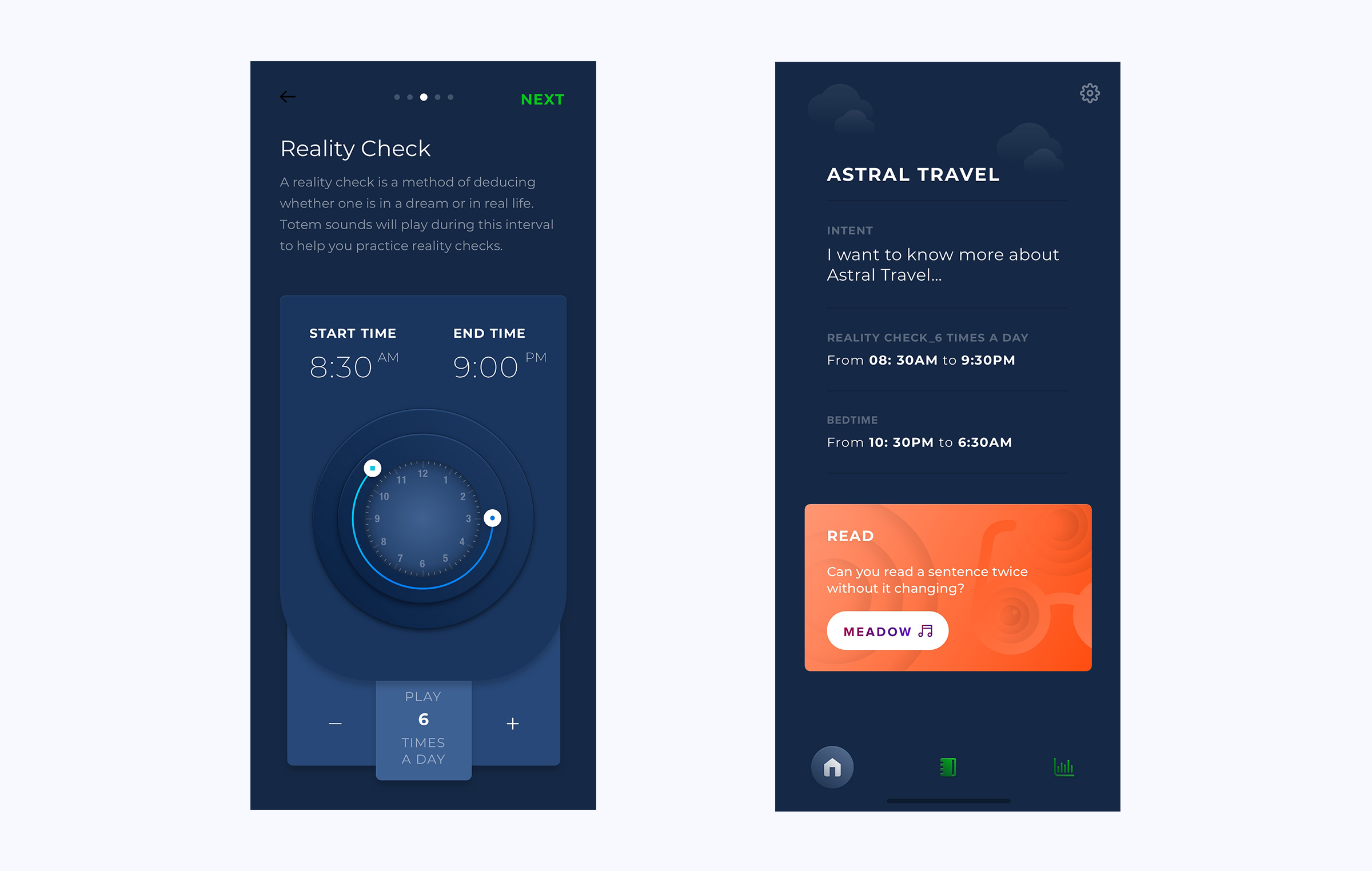 In addition to that, the visual indicators turns red if a user selects less than 4 reality checks, because user needs to practice enough during the day to become more lucid at night.

Similarly, for bedtime indicators, we designed it in such a way that it gives dynamic visual feedback based on the number of hours of sleep selected. This visual cue was important because users must know that mostly the deep sleep happens in the first 4 hours and it’s only after that a dreamer reaches the REM state. So anything less than 7 may not be a good duration for lucid dreaming. To represent that, we designed the dial to turn red if the user configures a wrong sleep duration.

One of the features of the app asks users to record their dreams in a dream journal. That can happen even during the middle of the night when they might wake up abruptly. For this reason, we’ve kept a darker background theme for the app.  Also, to make this feature more user-friendly, we’ve added three ways in which a user can record a dream- by making a note, by voice recording or by making a sketch.

The default option is recording because the user might wake up in a disheveled state, and at that time recording voice is the easiest way to record the dream. It doesn’t matter how long the recording is, the upload happens transparently in a non-obstructive way while the user is giving titles and keywords to his/her dreams. 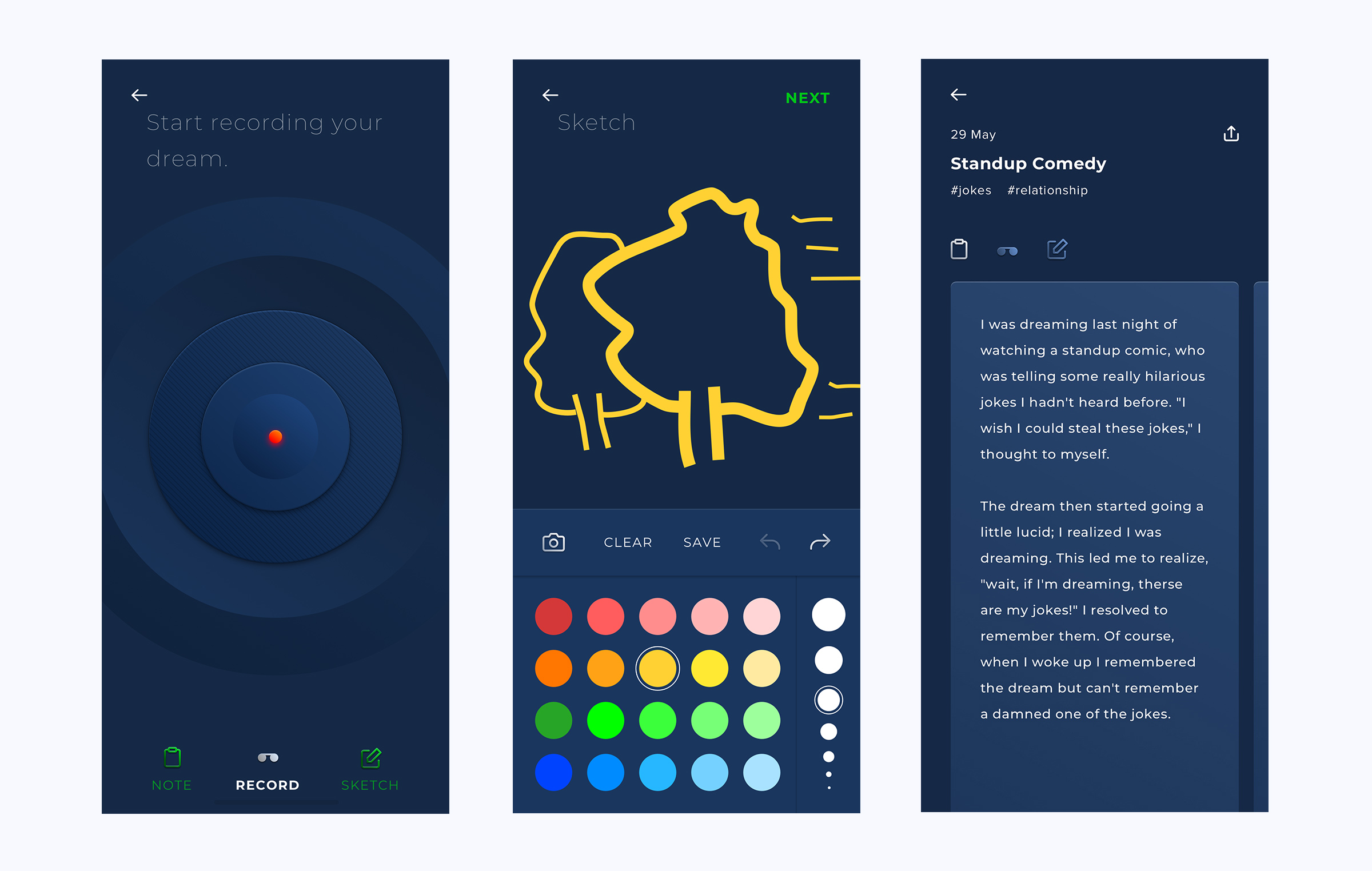 Audio recording is also possible through Siri so that the user doesn’t necessarily have to look at his/her phone’s screen. Instead one can ask Siri to record and when you open the app, your recording would be there.

We came up with this idea while studying more about user interactions and how caring for users well-being makes design more intuitive.

My learning from working on this iOS app has been nothing short of magnificent. If you ask me to sum up my experience in one sentence, I would say– always keep your end users in mind. Ultimately, it’s them who are going to use the app. I like to believe that we were able to do that to a large extent.

It took us nearly two months to build this app from scratch– right from research, ideation to the design and development. We worked tirelessly to make this one of the best Lucid Dreaming apps on the App store.  I wouldn’t say that we have done everything we could to design this app. There is still a lot of scope for improvements. We are also very excited about the user feedback that will start coming in soon.