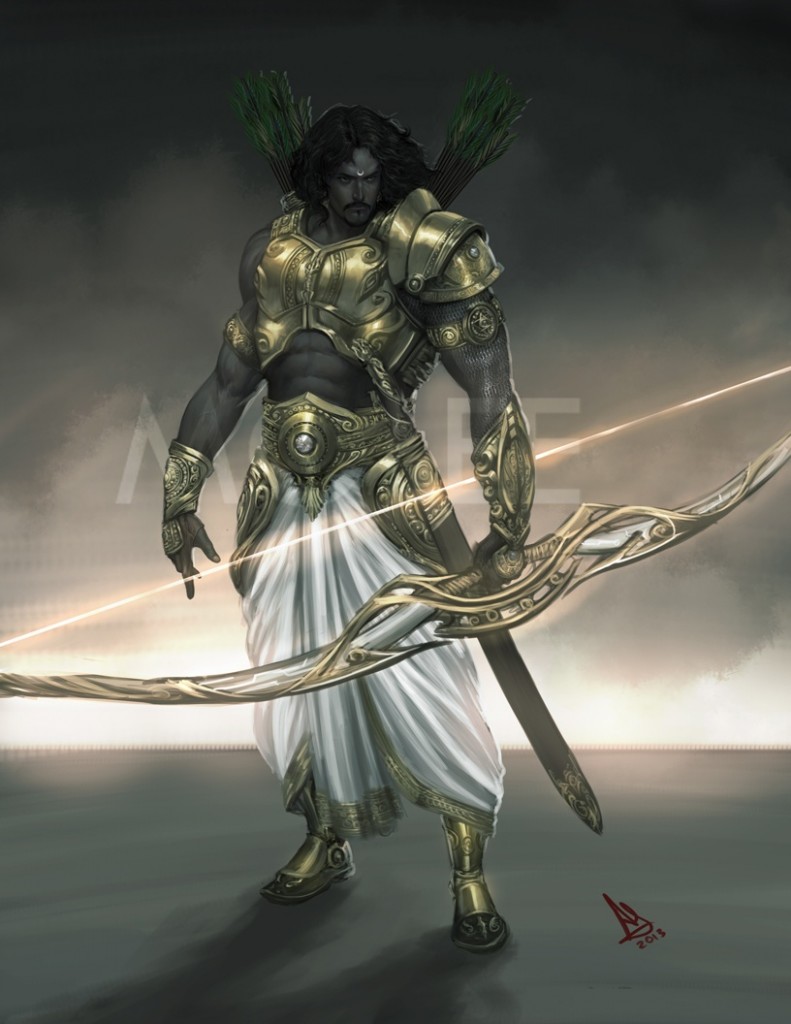 Arjuna, the third of the Pandava brothers, was the biggest bad-ass archer to walk on the surface of this planet. A mere pulling the string of his bow would make such a deafening roar that his opponents would quiver with fear and wet their pants. Fighting with him meant getting a kiss from death.

He was trained by the famous guru Drona for many years who took a vow to make him the best archer the world had ever seen.

He became so adept at his craft that he could shoot in the direction of his opponents precisely by just hearing their footsteps, whether it was day or night. He could shoot the eye of a bird sitting on a tree’s branch from miles. He could spew venom, fire, water, thunderstorms or lightening from his arrows.

He married the princess Draupadi in a Swaymvar – A medieval bachelorette. He won the contest called “Kill the fish, Get the girl”(it was the original Kill Fish Vol. 1) by defeating other stately prince who couldn’t even muster the strength to get started.

If you allow me to digress.

Holy Moly! He didn’t do that!?

When his evil cousin brothers, Kauravas, snatched their kingdom by deceit, vilified his wife, Draupadi, started ruling the land in an unjust manner and brought stigma to the family and the kingdom, the Pandavas decided that it was time to restore Dharma (read: justice, fairness and equity) by kicking on Kauravas on the chest and yelling- “THIS……IS…..DHARMA!!”.

Well, Arjuna along with his brothers decided to wage a war against Kauravas to instill the value of fairness and justice in the society. More like reviving a company from its downturn.

The only problem was that the cousins, Kauravas had the biggest army of their times. So, before it became a death march project, Arjuna decided to get help from (Lord) Krishna, the avatar of Lord Vishnu.

For the unaware, according to sacred ancient Indian text, Lord Vishnu is the keeper of the earth.

He is the master strategist who runs the world and takes the shape of Avatars like Krishna to restore justice, peace, set the earth on path of prosperity, remind the human race of their divinity or simply kicking the butt of all evil people.

So, Arjuna decides to take help from Krishna. Krishna offers Arjuna to take his entire army(Krishna was a prince too) or just him.

It turns out to be an easy decision for Arjuna as Krishna was the master strategist, keeper-of-the-hearts, wisest-of-them-all, extremely powerful, a principled man and all above, the incarnation of Lord Vishnu. Talk about a serious A+ player.

He wisely choses Krishna. Krishna then decides to become Arjuna’s peer by driving his chariot in the battlefield and give him advice on the war tactics. Pair programming, anyone?

This decision turns to be the most decisive decision of the battle as the strategies created by Krishna helps Pandavas kill their cousins, destroy their very powerful army, win the epic Mahabharata war and restore their glory and Dharma.

So, what is the moral of this long story? And, why do I share it?

Well, if you were to look at it. Back then and now. The only thing that matters in winning is the group of right people. Whether it’s ancient Indian mythology or the advice from the Western Management gurus like Jim Collins, who in his famous book, Good to Great said – “It’s not people but the right people that matter”.

Even VCs follow the same philosophy. More than the idea, they look at the team which is going to execute the vision.

So, when the time comes to creating a group, do like Arjuna did – only focus on hiring the best. When the choice comes to hiring few average team members or one A+ team member. Choose the A+. And, after you have selected them, listen to them, let them do their magic and get out of their way to be successful.

That’s one formula that predicts a high degree of success.