After beta version and so many of RC’s finally Angular 2 got released. So I thought before diving into ng2, it’s a good time to understand the architecture of Angular 2.

Angular 2 is quite different from its predecessor. It is component based, use of controllers and scope has been depreciated. Syntax and structure have also changed.

There are basically 8 building blocks of angular 2. These are-

Lets understand each one of them one by one. 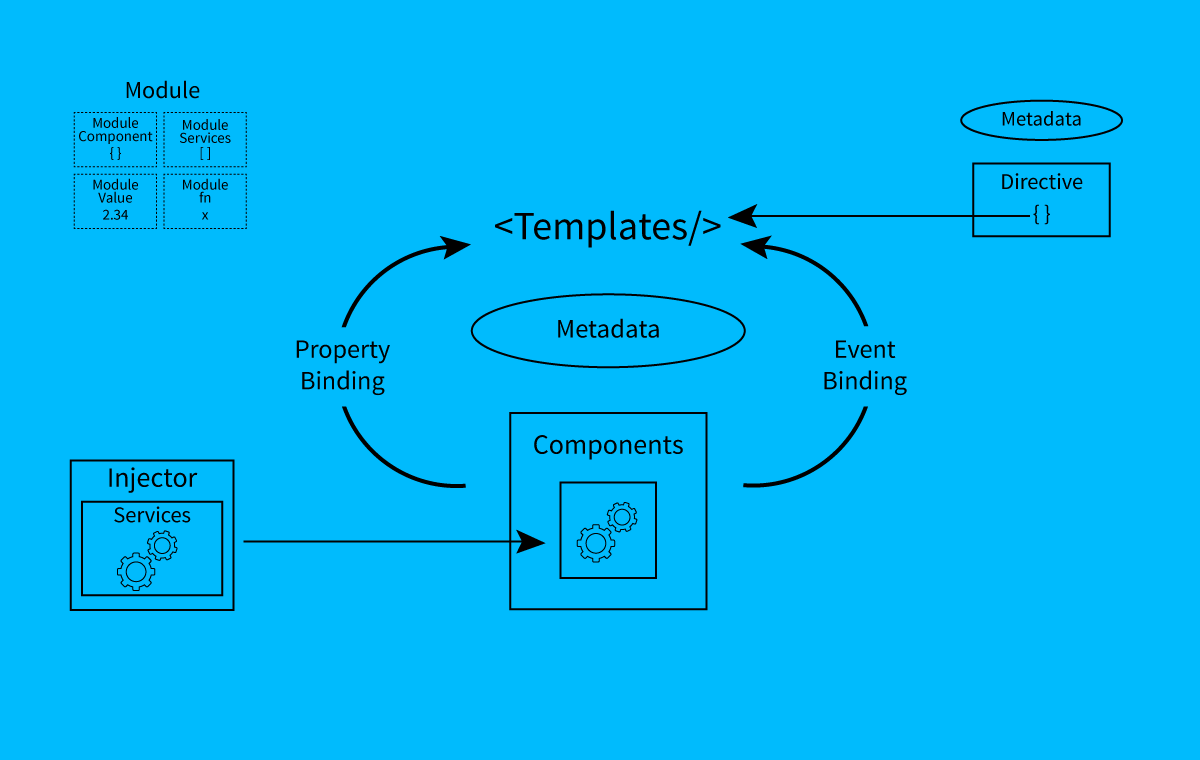 Modules are the block of code that do certain type of task. A module exports some value in the main code, such as class. The first and the most common module that you will study is the one that exports Component Class.

Here app.component is a module.

Libraries names start with @angular prefix.  Modules can be a library of other modules. Angular 2 itself has many modules that are libraries of others.

@angular/core is the most important library that contains most of the modules that we need.

A component is basically a class that is used to show an element on the screen. The components have some properties and by using them we can manipulate how the element should look on the screen and behave. We can create a component, destroy and update as the user moves in the application. Life Cycle hooks are the modules that we use for this purpose. Like ngOnInit()

Here blogComponent is a component

The view of the component is defined through templates. Templates are basically the HTML we use,, to show on our page.

This is a simple HTML file but you may have the question what are these elements.
*ngFor,{{food.name}}, (click), [food], and <food-detail>?

Metadata tells angular how a class should be processed on the screen. For ex.

To tell angular we are using a component with certain metadata, we attach a decorator to it (“@”).

Here @Component will be identified as a component class.

Directives are other components that this Component will require to render and providers are the services required.

The template, metadata, and component together describe a view.

There are 4 ways of binding a data according to the direction : to the DOM, from the DOM, or in both directions

There are 3 types of decorative

A component is a directive-with-a-template

Attribute directives changes the appearance of DOM elements. For e.g.

A service is a class containing any function, feature with a defined and specific purpose. For e.g.

Dependency injection allows to inject dependency as a service throughout the web application. To inject a dependency we do not create a service but we have a constructor to request the service. The framework then provides it. For e.g.

WHAT NEXT?
Angular 2 can be written in TypeScript, Dart or Plain Javascript. But recommended way is to use TypeScript as of now because the documentation is written well in that. To understand each of the layer separately or diving more into it  you can see the official documentation which is available in all of the three mentioned languages.

How to Design with Code?
How to Cook your Code Smartly (Write for Future)
Best Practices of ‘LESS’