I started with Ubuntu installation on Windows 8 and little did I know that it will have its own new complications. Lets try to understand!

Since I had Windows pre-installed, the obvious suggestion to use ‘WUBI.exe’ was thrown at me. I went to the Ubuntu site to download the installer and got the Ubuntu 12.04 set up from the team. All I had to do was to let WUBI handle the installation and it would have been done but, it failed.

I made the USB installer from 12.04 Ubuntu setup. First, I had to download the USB installer and later insert the pen drive. Second, I had to run the installer and let it handle the rest. After you get the USB installer prepared one has to boot the system from the USB and for that one has to reach the BIOS set up first. Another interesting point, ‘do you know how to reach the BIOS setup on windows 8?’. Windows 8 works on UEFI technology and thus gives you a span of only “.2” seconds to hit the Del/F2 button bang on at the right time. Try to give it as a challenge to someone and you can bet 1000000$ bucks on it cause he will not get that done in his lifetime! Right!

Another option is to go to the Windows setting from the start menu and to reach the General option. There the smart Windows 8 will ask you whether you want to boot again using other source like USB/DVD/CD. So, that will work if you have a USB/DVD/CD connected to the system. Remember only one! But the USB installer also didn’t work cause of what I later found out is the Windows 8’s UEFI feature. 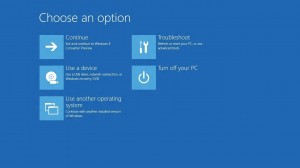 UEFI stands for “Unified Extensible Firmware Interface”. The UEFI specification defines a new model for the interface between personal-computer operating systems and platform firmware. The interface consists of data tables that contain platform-related information, plus boot and run time service calls that are available to the operating system and its loader. Together, these provide a standard environment for booting an operating system and running pre-boot applications. UEFI would not support any OS without the UEFI feature so I had to do what I did next.

Got the Ubuntu 12.10 version and after a good hour and some minutes of my precious Ubuntu download I again made the USB installer. Do you want to know why I didn’t choose the WUBI.exe option? Well, when using WUBI.exe, I was given a choice from 3 GB to 30 GB for the Ubuntu storage, to which my team member informed would be insufficient. Like anybody in a similar situation, I too went with the ‘Boot using USB’ option but to my horror even this didn’t work.Hmmm!

After disabling the Secure Boot option in Windows 8, I got the Ubuntu USB installer working. I rebooted my system again to find that I didn’t get the option of Windows reboot! Do not worry as I didn’t write this blog without any prior success with the Ubuntu installation ;). Ever heard of “boot-repair”. Download it from the Ubuntu link and run on Ubuntu, reboot and success! 🙂