In today’s world of rapid development needs, version control tools (read: Git, SVN etc.) provide a good way to satisfy our needs of streamlining the development process. It is common for enterprise applications to be developed by a team until you have a Bill Joy working on it. Every now and then, the product owner will keep coming up with new features and modifications to existing features. Incorporating all this requires a lot of structural changes to your project architecture and to the schema involved.

We have made major progress in the context of version control for our code. But we haven’t made such great progress in the context of version control as far as our db schema migration is concerned. I have personally worked in teams where we have to apply the migration scripts with each deployment. Now imagine a scenario where after deployment on production you find out that some of the features are not working.

You are in a fix as the QA team just tested the build on the staging environment where everything was working like a charm. After going through a debugging session you find out that the culprit here is one of the missing SQL scripts that contained some schema changes that one of your peers has checked in but has called in sick on the day of deployment. All this trouble could have been avoided had you been using a schema migration tool for your project.

There are various schema migration tools like liquibase, flyway (java platform) and db-maintain options available to you.

Today we will take a look at Flyway and its integration in a Spring based application. First lets look at how Flyway works-:

Using Flyway with a Spring based app

Now that you have got a hang of core working of Flyway lets see its integration with a Spring Application. Following are the steps that are required for this integration-

Now let’s first understand this bean definition. We define a bean ‘com.myzilla.migration.MyZillaMigration’ and tell Spring to run the method ‘repairAndMigrate’ on successful bean creation. This bean requires three property definitions for its creations: 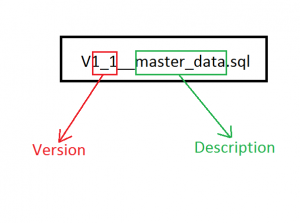 The filename consists of the following parts-

The files are executed in the order of the version of the file.

Now lets take a look at the class MyZillaMigration.

This class extends the Flyway class and calls the repair and migrate methods of the extended class. The repair method clears all the failed migration entries. I personally call this method before migrate because if one of the previous scripts fails and if I make some changes for running it again then because of the checksum differences the altered script won’t run. For this altered script to run again we need to make sure that its previous entry is deleted from the ‘schema_version’ table. Calling repair before migrate helps me do so.

For a more detailed study please head to the FlyWay official website. Hope you find Flyway useful for your development needs . Happy learning.