The art of giving feedback 💬

“If I was not doing well, why didn’t you tell me earlier? Why did you have to wait the whole year only to have it impact my yearly appraisal negatively?” he said bashfully after listening to his awful annual performance review.

He felt betrayed because all throughout the year he was under impression that his work is meeting the expectations. Had he received this feedback early, he might have changed his direction and would have improved his performance through the year.

His manager had her head down with embarrassment. She really wanted to share that he wasn’t performing as per expectations but just couldn’t muster the strength. She wondered if it was because she didn’t want to break his heart or wanted him to like her as a manager.

Does that sound like a similar story- not getting performance feedback on time? Know that you aren’t alone.

Most of the managers that I know shy away from giving real feedback.Especially the first-time managers.

I know it because I was one such manager too.

The reasons are similar – can’t handle confrontations, want their direct reports to like them, don’t want to break people’s heart by saying negative things. Don’t believe me? Here is a snapshot of survey done by Mckinsey in 2016- 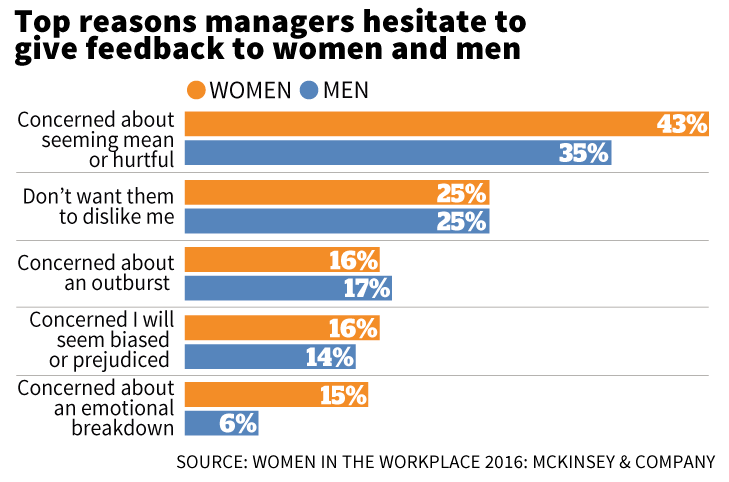 We could alleviate so much workplace heartaches and even make our team members better if only we believed in giving actionable feedback on time.

Why is Feedback crucial?

Kim Scott, the author of the book Radical Candor, said that “Criticizing your employees when they screw up is not just your job, it’s actually your moral obligation.”

I can reiterate that in my own words and say that feedback is an essential component of effective change. And in the famous words of Ken Blanchard, Feedback is the breakfast of champions.

Success isn’t one single supreme stroke of hard work. It is course correcting after gulping down failures with feedback. The right feedback at the right time can do wonders to a person’s success trajectory. So, unless you are the Arjuna of your story, working without feedback is like blind-foldedly aiming at your goals and hoping that they hit the bull’s eye.

So, how does one give actionable feedback?

On the surface, it is so easy, tell the person-  if he/she is making progress or regressing into the black hole. But, I wish the reality was the same. If you are new to giving feedback, I would highly recommend reading how to give feedback which people can actually use.

However, it’s not just about feedback, it’s how you give the feedback. Inspired by Kim Scott, here are some ways that you can borrow-

1. Ensure timely feedback
Timely feedback ensures that nothing is lost in translation. If you wait too long to give feedback, the risk of losing the context becomes higher. Another advantage of timely feedback is that communicating on a regular basis will ensure that your feedback is not perceived as a “dreaded event” but an honest and open opinion.

2. Be specific with your feedback
“It was good”, “Great job!”, “You can do better”, “Something is not right” have probably made it to the vaguest phrases that people most often use while giving feedback. The positive ones will keep you wondering what’s so ‘great’ about you and the negative ones might leave you in tears.

So the right way to give any feedback is to get to the point, fast and clear. Be specific with criticism. Don’t shit-sandwich the bad ones just to make faults or rejections more palatable. Instead, be authentic and transparent and say what you think might help the person become more productive.

3. Don’t personalize the feedback
There is a difference between saying “I think, this is wrong” and “You’re wrong”. The first one leaves room for conversation, the second one is more like you holding a shotgun on a person’s forehead. Always give the feedback on the action, not on the person.

4. Give feedback in private
Handling criticism is not a cup of tea for everyone. Each person reacts differently to different situations. To each his own. So as a rule of thumb, try and give feedback in a one-to-one setting. Set up a time and a room where two of you can sit and have conversations. So that if something blunt or abrupt comes up, it’s between you two to handle.

And I will close this on one last suggestion. Before you start following the above-mentioned points, you have to start with yourself. Get comfortable with listening to feedback about yourself. Harvard Business Review did a case study to prove the correlation between the ability to listen and give feedback. The stronger your team members believe in your ability to listen, the most they will believe in your ability to give feedback. See the stats in the chart below- 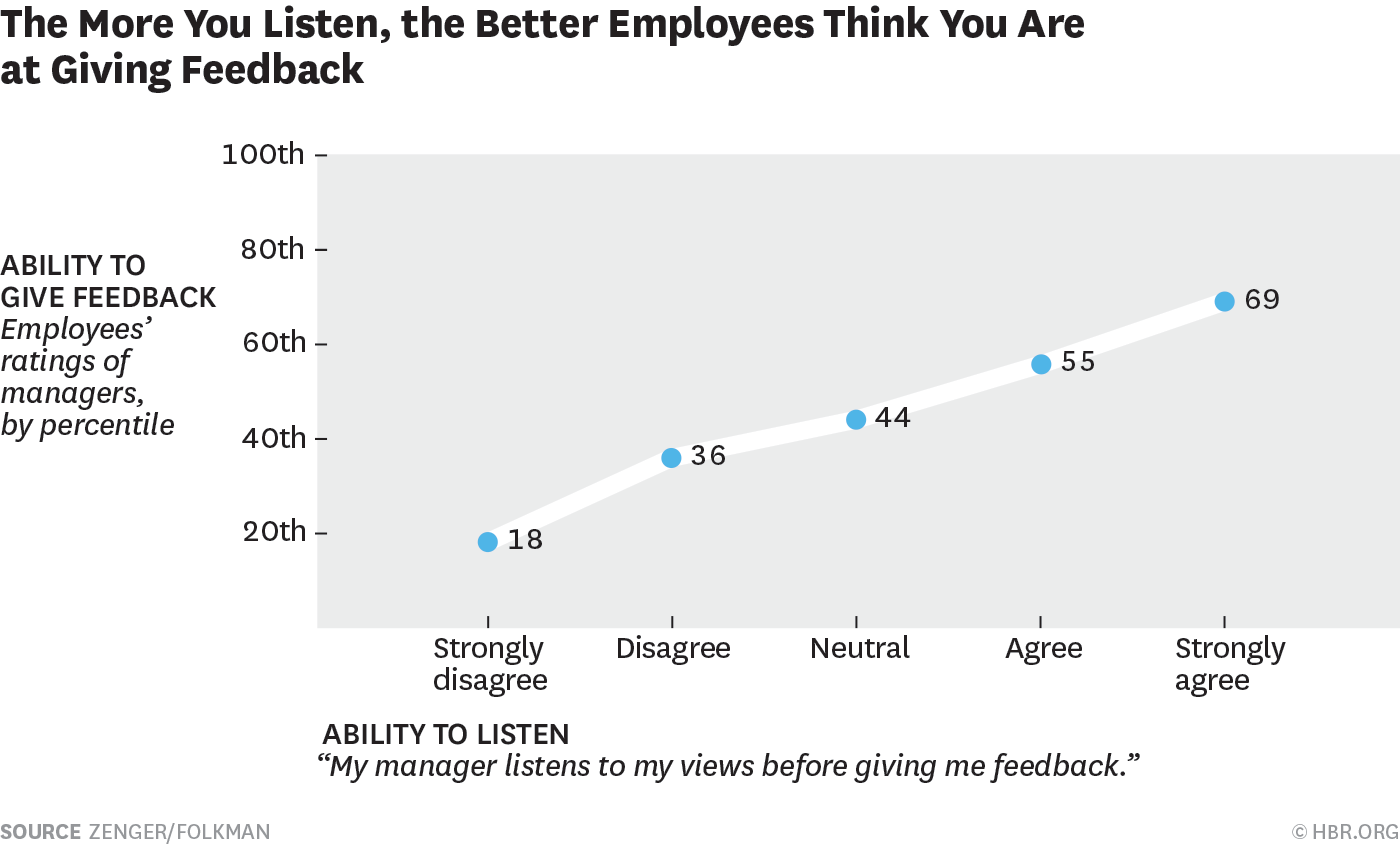 I hope this helps you in giving a better feedback. I hope you make your feedback sessions more interactive and inclusive.